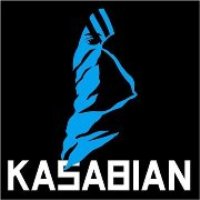 This is a review about Primal Scream.

I really like the way the Scream have changed through the years, from jangly C86 stalwarts to Stooges wannabes, into their most influential stage as psychedelic dance enthusiasts, through the decline into Southern fried crap, and especially into their rebirth as aggro-agit-dub-dance dirtbags. I love that their new records sound like they were assembled by pissed off robots built by the guys from Kraftwerk in collaboration with the guys from the MC5, all directed by Kevin Shields (The last part of which is kinda true. "Shoot Speed Kill Light" from the US version of Exterminator is the closest thing we'll get to a new My Bloody Valentine song in my lifetime…). But then they "keep it real" live — dirty, scary, and messier than hell, real honest-to-God rock music.

Now polish all the edges off that. Then make sure you write at least one (preferably three) radio-ready hits. Done? Good. Now, you'll need a name. Why don't you call the band… Kasabian?

That sounds like a slam; it's not. I like this record a lot. It gets frequent comparisons to "baggy" bands, especially Happy Mondays, and I guess Tom Meighan's vocals can take on that wasted-poet sound perfected by Shaun Ryder. There is an occasional lysergically dance-y vibe to it (most explicitly on "L.S.F."), but I don't really see it in any meaningful way. The original baggy movement was like a new version of the Summer of Love fueled by ecstasy and lazy rhythms. The original Summer of Love ended with gang violence (Hell's Angels security guys, at least) at Altamont. Similarly, baggy wound down at its spiritual home in Manchester as violence related to the booming drug trade exposed the seamy underbelly of those good times. Kasabian reflects more darkness in their druggy dance vibes, reflecting the times and changing the feel of the music. This is definitely not "baggy." Liz here at three imaginary headquarters mentioned Kula Shaker, which seems a lot closer to the mark. They were late comers to the party — post-baggy if you will — trying to keep dance music and rock music connected. And there was always something a bit contrived about them, as it feels like is the case with Kasabian. In both cases, that doesn't stop me from enjoying the music one bit at all.

By now you've heard the ubiquitous "Club Foot." That cut is the album highlight by far. I've heard it 1,000 times and I won't mind hearing it 1,000 more. Genius pop song.

The other hott cuts (that's right, hot with two "t's") are "L.S.F." and "Processed Beats." Most of the rest of the record sounds like a variation on one of those ideas (except for "Reason is Treason" which, while not really single material, is my second favorite song on the album, as it updates, rather than "quotes," the Velvet Underground a bit.). And while the rest of the songs on this record are not exactly filler, they won't haunt your consciousness quite like that bass/vocal riff in "Club Foot" does, either.

If this all sounds a little jaded, it probably is. I'm still a sucker for the UK music press hype machine (I bought the Terris record. And King Adora. And These Animal Men. And Marion. And Tiny Monroe. Shall I go on? No, I'm not proud. Yes, I still listen to them sometimes.). As a result of my proclivity for gullibility, I get my hopes up way too high for releases like this one, only to have them turn out as really great rather than abso-f**king-lutely amazing and/or life-changing. So don't consider this review damned with faint praise. I have a lotta praise for this record: it's a pretty rocking, pretty ripping, pretty danceable album, a whole lotta dirty (as in fuzzy and distorted) fun. And it's even a bit better heard live.

Well, Kasabian isn't quite Primal Scream. But they're damn near, and that's more than enough for me. Can't wait for the next one.