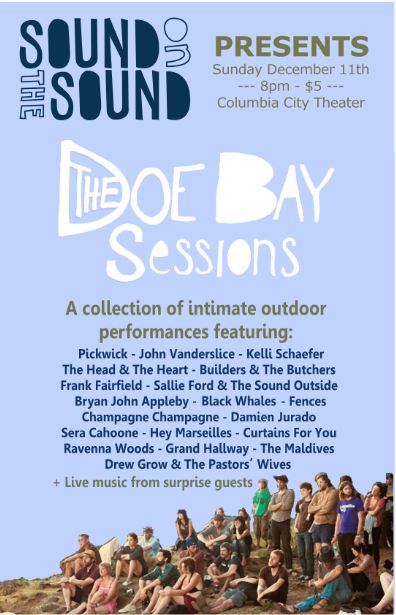 This weekend's slated to be a good one (as are most) out at Columbia City Theater, with a series of shows that are set to knock the folk right out of you.

First, Sunday: our friends over at Sound on the Sound will be running a Doe Bay Sessions screening and fundraiser, which in our HO is the best five dollars you'll find yourself spending for the rest of this calendar year. SOTS has made a true art form out of capturing these band sessions at Doe Bay each year, capturing one-of-a-kind performances from the likes of The Head and the Heart, Pickwick, John Vanderslice, Damien Jurado, Kelli Schaefer, Sallie Ford and the Sound Outside — the list goes on and on. Belly up for a few drinks, see some sessions on the big screen and take in a few performances from the lush comfort of CCT! Really, you can't lose. Again, tickets are only five dollars, but if you want to make a donation to the cause that goes over and above, you'll be able to do so at the show. {21+ / 8p / tickets}

Saturday's got your number out in Columbia City as well, with a daytime and an evening show combo at the Theater: The Seattle Folk Festival will be taking place from noon 'til six and then again from seven through closing time. Shows are $15 and $20 in advance respectively, and if you've been eyeballing that daytime lineup {Bryan John Appleby, Sons of Warren Oates, Youth Rescue Mission, Sean Finn and the Royal We, Goldfinch, and more!} you're in luck — because we've got a pair of tickets to give away to the show! Just send in your entry to tig {at} threeimaginarygirls {dot} com with the subject line "SendMeToTheFolkFestival" sometime between now and 10a on Friday, December 9th. We'll pick a winner at random and let you know via email that you and your +1 will be on the list for the show!

Good luck, everyone — we'll see you in Columbia City!