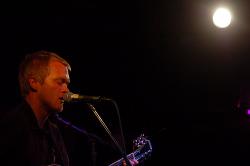 The night stared out slow. Three people-five people… six people… a slow trickle ensued through opening San Francisco act Songs for Moms. For any Terri Zwigoff fans out there, the lead vocalist did, in fact, bear a more than striking resemblance to the character Enid in Ghostworld. Plus points!!

By the time psychedelic-folk group Blitzen Trapper hit the stage, the house was starting to make some friends. Having briefly seen Blitzen Trapper at Sasquatch (in months previous) I had a general idea of what to expect, but their sound was five times sharper, smarter, and together than I ever remembered it. I was definitely impressed, as was the audience (which was surprisingly eclectic for this show).

Two Gallants (I learned I was pronouncing the name incorrectly after meriting several confused looks from security and other), took the stage around 10:30 PM. By then, the Crocodile was enjoying a full house of eager music fans. What struck me about the two-piece (Adam and Tyson) was how much sound they were able to create with just a few instruments (harmonica, percussion, guitar, vocals). Their music was entirely cohesive and never more in my life have I seen two people that just seem to get each other. I was blown away.

Tyson drums as if the very drum throne he sat on was on fire, while Adam supplements with his sometimes gentle, yet abrasively rough guitar riffs. Energy and total understanding as seen between these two musicians is incredibly rare, and I couldn’t help but take notice. Apparently, neither could the audience.