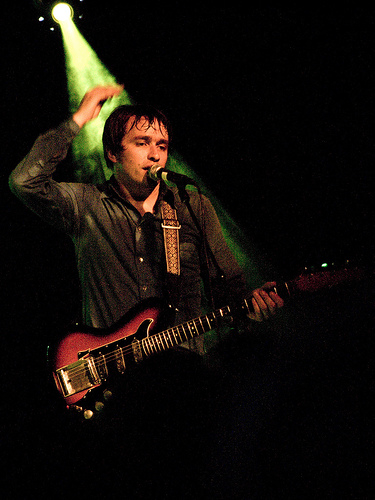 Pizza, beer, and juice with Peter, Bjorn, and John

Tonight, Peter Bjorn and John will be hanging out at the Sonic Boom General Store in Fremont as guest cashiers, and you can like, have a snack with them, or buy some good from the store from them. I had to read this announcement twice before I really believed it was true… I never imagined I could buy a magazine or a pack of gum from a genuine Swedish pop supastar!!

Join us this Thursday Sept. 20 from 7:30-8:30pm. Peter Bjorn and John will help celebrate Sonic Boom's 10-year anniversary by guest cashiering at the Sonic Boom General Store (3416 Fremont Ave. N). We'll have plenty of copies of their fantastic album "Writer's Block" in stock on CD and LP and if we're lucky they might play a song or two.

The band is also playing an all-ages show at the Showbox later tonight, with the Clientele and Marisa Nadler. Peter Bjorn and John were a highlight of my SXSW trip earlier this year, so have a blast!!