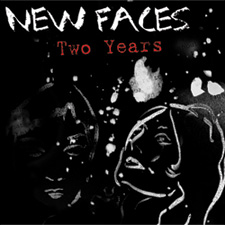 New Faces consists of Nico Janssen on lyrics and lead vocals and guitars; Kyle Hove on bass and shouts and claps; and Conor Sisk on drums and those ever-present shouts and claps. These three young men from Port Townsend astonished judges into giving them first prize at the EMP Sound Off this year out of over one hundred entries. The band has been getting play on KEXP and hitting all the requisite block parties and regional festivals besides.

Produced and mastered by Blakes' winning studio team of Brian Brown and Martin Feveyear, there is an unholy confidence from the beginning of Two Years onward, starting with radio-feeding single "Impulse" through the torched intimacy of "You To Me" ("you're twisting up your heart on me").

I confess that I actually downloaded the album into my favorite listening device backwards though, and thought it bizarre a fresh new band's first full-length would start off with the maturity and depth of the melancholy "End Of A Time" (actually the last track here) with Janssen's handsome baritone and all-the-way-through-quotable lyrics: "Not the same anymore / days of old are days of old." That wizened punch goes straight into one of the best bridges I've heard lately: "While pessimists create apocalypse / there's some young girl getting her first kiss." This is timeless alternative rock as meaningful as the Stranglers in the 70s, the Call in the 80s, or any other sort-of dark philosophical group with a crisp lyricist and a deep danceable sound. (Next time out I would love to hear Janssen really go off in his guitar playing; somehow, with the arch construction of their tracks, I doubt that he will.)

Back to what the music seems to be about: There's a lot of empathy in these songs, as in the observations about a girl in "Across The City" ("Just in from a night of pain / her hopeful evening turned to shame"), and the spidery bass lines of Hove and great percussive syncopation from Sisk keep everything from ever getting near ponderous or morose. I'm not going to say there isn't a lot of familiarity in the heavily compressed and over-the-top catchiness of "Impulse" and elsewhere; but knowing how thrilling this band is live, it's refreshing to find out how deep and strong the songs would get — arguably a lot stronger from beginning to end. You don't expect that much potential shown on a debut these days.