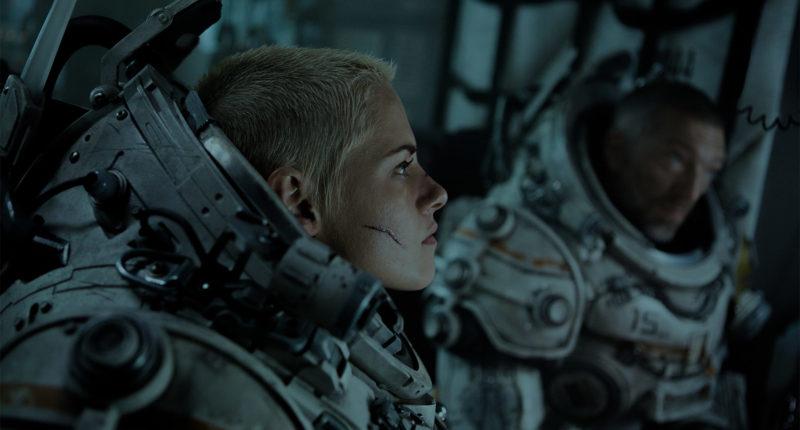 I’m still processing what went down on screen in Underwater, which is an insane Alien meets Cthulhu mashup that starts the action pretty much from frame one, and mostly doesn’t stop until its explosive (aaahahahahaaaaaa) ending.

During the credit sequence, we’re treated to flashes of media headlines detailing the Kepler Corp’s deep sea drilling ops and how working that far underwater is dangerous for their employees. Then we cut to mechanical engineer Norah (Kristen Stewart) seven miles down in the Mariana Trench, brushing her teeth in sweatpants and a sports bra – as you do – when she hears some strange noises coming from outside. Her head cocks slightly as she listens, and then BAMMMMMMMMM something blows; the walls collapse, and the hallway she’s standing in is suddenly immersed in water.

After (barely) outrunning the flood in bare feet she finds Rodrigo (Mamoudou Athie), and then uhhhhh ends up having to seal the door to shut out some crew members who just weren’t gonna make it. The two of them determine the whole station is going to blow the fuck up and decide to hightail it out of there to the escape pods – well, as fast as you can hightail when you have to climb over and through precariously balanced wreckage, anyway.

Along the way, Norah and Rodrigo find Paul (TJ Miller), Captain Lucien (Vincent Cassel), Emily (Jessica Henwick), and Smith (John Gallagher Jr. – aka my boyfriend) — seemingly the only survivors of whatever caused half the station to break. But dammit! Those escape pods are all broke, son. And the Captain says the only way for them to survive is to drop down to the seafloor and walk in the pitch dark to their drilling platform.

Hey also, there’s a catch: the suits they have to wear while they’re walking will maybe-kinda-sorta-just-barely have enough oxygen to get them all the way there. So basically, if they stay, they die for sure; if they leave, they die probably. WHAT A CHOICE. What a choice. Why did these people take these jobs again?

AND …. there’s a second, much bigger catch: just after they start their journey, they realize that something else is very, very, very wrong — something is moving out there. Something with tentacles. And teeth. SO VERY MANY TEETH. Something that can tear apart an escape pod like it’s flimsy tin can and eat the tasty human contained within.

Will they make it to the station? How many will be eaten? AND WHY THE FUCK DID THEY BRING THAT TENTACLED THING THEY FOUND ON BOARD?!?!? And also, what’s with that stuffed rabbit? I don’t get it. No really, explain it to me.

Look, this movie is INCREDIBLY DUMB. But it’s dumb in some very spectacular ways, and the creature work is 100% awesome. I had an enjoyable time watching, and I’ll probably do it again — especially if I could somehow completely remove Paul, whom I found incredibly annoying (there are plenty of legit reasons to hate TJ Miller and his mere presence almost ruined my enjoyment of the movie, but also his line delivery and jokes were just like fucccccckkkkk offfffff).