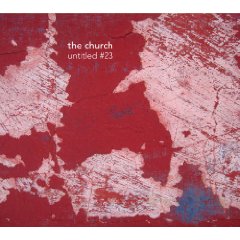 After the lackadaisical and disappointing Uninvited, Like the Clouds (2006), it was uncertain as to the future of Australian psychedelic group, The Church. The band has reemerged with not only a new album, but with two E.Ps as well, all of which are on their own recently founded record label, Unorthodox Records. The great news is that Untitled #23 is a refreshing return to form after a bit of a slump in their career with the previous studio effort. The new disc reveals that the band still has the ability to craft exceptional music even despite the occasional misstep.

One of the most striking and auspicious aspects of this release is that Steve Kilbey handles all of the lead vocals. With most of The Church’s recent releases, the band’s two guitarists were each granted lead vocal duties on a track and the songs, in addition to their voices, always paled next to Kilbey’s. This alone makes Untitled #23 much more consistent. Aside from that, it contains ten slow to mid-tempo songs that blend together well. In this respect, the record has a similar feel to their 2001 album, After Everything, Now This.

Opening song, “Cobalt Blue,” is a trance inducing, underwater opus that gives way to the terrific “Deadman’s Hand,” an edgy tune that is an instant classic. The trippy rock song rates up there with the best of their recent material. The Church sound reinvigorated maybe in part due to being free of a label, but this fact is also clear in the sonic quality of the recording. The melancholy “On Angel Street’ is also a high point. The simplicity of the song is both stark and beautiful as it captures the lyrical sentiment. “Sunday disappears into a fog/Darkness invites us all inside to hide amongst the lamplight radial glow.” An ambulance siren-like keyboard plays repetitively while atmospheric guitars augment the remorseful mood.

“Anchorage” is perhaps the centerpiece and standout track on the album. It is a gorgeous, winding melody that is augmented by the driving, raw vocal delivery from Kilbey. This song alone tops the entirety of their previous album. The degree of unrest in his voice is poignant. He sings the lines, “And the ice in my glass/And the hit of the past/And the great icy blast/I pass it on to you,” like a man possessed. Humorlessly, he goes on to spit out the verses, “Words of a mute/The passion of a rock/Waking early on an Easter Sunday/Just before the cock,” with such irreverent disgust. It’s a truly sensational composition.

There are many other fine moments on Untitled #23. Check it out for yourself. It may take a few listens before it sinks in, but when it does, the album reveals itself to be a monument of stunning grandeur. It is amazing how The Church has managed to put out so many great records in their nearly thirty year history.