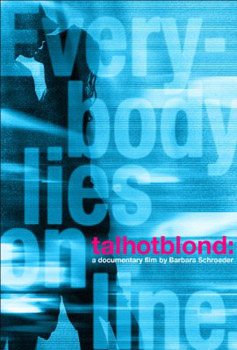 Thomas Montgomery is a pathetic man: he is middle-aged, fat, and balding, working a job he hates while coming home to a wife who he daily loves less and less. He goes online and finds the affection of a person with the handle “talhotblond” and starts an online romance. Things get complex and a third person enters and doesn’t exit alive. He is a coworker of Thomas’ who is also smitten with this tall, hot blonde. Such is the plot for Barbara Schroeder’s intense documentary titled, appropriately enough, talhotblond.

The doc is narrated by the victim in this, a young man named Brian. Well, not exactly, Brian is dead; he was murdered by Montgomery in cold blood, so he can’t exactly give interviews, let alone narrate the film, so she has actor playing Brian, giving insight into his psyche that may or may not be true. A documentary about lying on the internet is told by a character who was magically brought back to life to tell his story.

Montgomery, despite shooting him three times with a rifle that ended the twenty-two year old Brian’s life as well as Montgomery’s paranoia, dishonesty and racism, he’s not the villain here, but the third person in this bizarre love triangle is. Without giving away the major plot twist (which was both unexpected and inevitable), it’s understandable that director Schroeder is outraged that only one person is in jail for this senseless murder, but only one person Montgomery acted alone and any encouragement was only implicit. Make no mistake, the other character in this is a hideous person presented with no redeeming qualities, I’m just not convinced their activities were criminal.

By interviewing Montgomery on camera, and he being the only principle figure to do so, sympathy inevitably builds for him, which is a problem with documentaries when not everyone wants (or is alive) to tell their story.

Talhotblond is best when it’s viewed as a cautionary tale of an internet romance gone terribly, terribly wrong. Online, the truth is fluid but if you believe that there really is an eighteen year old sexy, blonde woman who is dying to give her virginity to a creepy, middle-aged man she’s never met and lives several states away, I have a bridge in Nigeria to sell you.