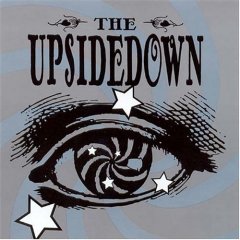 Over the last couple years, the Pacific Northwest has enjoyed a nice little movement, one that's taken the droney and psychedelic territories like the Brian Jonestown Massacre, Spritualized, My Bloody Valentine, etc. and injected it with new life.

One bands doing this with a great degree of success is Portland's the Upsidedown. Their debut record Trust Electricity blends the aforementioned influences with a bit of a Dandy Warhols attitude to reveal a sound that is both "looking forward" while paying homage to the deserving past.

Tracks like "Bumpersticker" highlight the bands fascination with the psychedelic vibe of the sixties, in a similar way that the Brian Jonestown Massacre or the Velvet Underground managed to focus through the slacked-out jingles. Meanwhile, "Dutches of York" shows a definite nod towards Spiritualized. The songs' playful energy, reminiscent of the Dandy's (i.e. "Airplane Eyes"), elevates some of the downtrodden tendencies that a lot of "shoegazer" influenced acts fall into. The Upsidedown have figured out that there's plenty of time to let the pot smoke sink in, but there's plenty of time to dance as well.

The quality of the sound works well with the band's material. The production translates the songs into a cohesive package and doesn't get in the way of the band delivering its message.

All in all this is a great record, full of lovely tunes that swim in your head. It will be interesting to follow this band as they continue on their journey as musicians. Will they continue to breathe new life into the past? Change directions entirely? Trust electricity, babe.