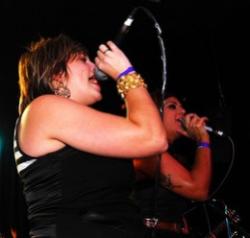 If I could have one wish, it would be to round up all those folks who say Seattle doesn't dance, and bring them to the U.S.E. show last Friday. There, Seattle's youth would systematically destroy these people's stereotypes of our supposedly reserved city. With their incredibly catchy electro-beats and distorted vocals singing of love and harmony, U.S.E. would turn these skeptics into believers.

The line-up at VERA last Friday was one made for dancing. The opening act was a Portland trio called Strength. I admit I was a bit dubious about this name. It sounded like either a heavy metal band, or a jazzercise record. But they proved my worries unfounded once they took the stage and released some very danceable electronica, while their lead singer Bailey Winters worked the crowd like he was in a Las Vegas lounge. Strength combined modern techno beats with funky retro bass and some 8-bit blips. Basically great dance music drawing influences from every decade since the 70s.

Unfortunately I missed most of the next act, Truckasaurus, because of my friend Gesa's and my need for Dick's Drive-In and an Elvis Costello album at Easy Street. From what little we saw upon our return, and a little research on Pitchfork, I gather that Truckasaurus is a progressive techno band that uses antiquated technology such as Gameboys and megaphones to make a unique and inventive sound. They weren't very animated on stage, but what they lacked in showmanship they more than made up for with their unusual costumes (full camo and American flags) and their crazy background videos. Behind them was a video mash-up of monster trucks, people on fire and WWE matches, which added to the air of eccentricity that surrounded them.

United State of Electronica was a big hit at my school last year. I think it's safe to say that nearly every hip person in my grade had "Emerald City" as their MySpace profile song at least once. They started a revolution of intense pride in our city which spurred us to venture into the downtown area, far from our suburbia homes. That's where I found myself at my first U.S.E. show: very far from home. I was no longer in a puddle of motionless indie kids, but in an ocean of spandex-clad, drug-addled electro enthusiasts, each armed with silly string and confetti. As the stage was decorated with the standard "U.S.E." lettering, the crowd began to chant the letters of the acronym, faster and faster until we were sure the band would emerge at the climax. Well… they didn't, but when they did come out a few minutes after, the crowd exploded with enthusiasm.

Being a very short person and toward the back of the mob I was only able to actually see the band about 25% of the time. What I could see was the mad dancing, the occasional crowd-surfer, the punks who would throw open water bottles into the air. The whole show was a blur of dancing, chanting, and singing along. Guitarist Jason Holstrom got the audience to sing "All You Need is Love," but as he admitted he didn't know many other words in the song, the moment ended quickly.

It was with a heavy heart that I left the show about 10 minutes before it ended, due to the unfortunate fact that I cannot yet drive. From what I heard from TIG writer ChrisB, and seen of Imaginary-Chona's amazing photos, at the end of the night, half the audience leapt on stage and danced with the band during the song "It Is On." Judging by how enormous the audience was (it nearly filled the large VERA dance floor completely) I imagine this couldn't have been the most comfortable experience. But it's the kind of thing I'd expect from U.S.E., who seem so full of love for music, for Seattle and for every human being.