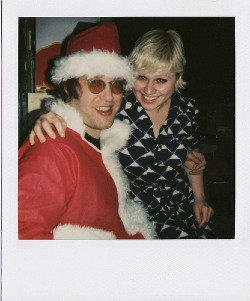 We are so excited for this Thursday's Imaginary Holiday Party for so many reasons. We've been able to gather some of our favorite bands of the year AND do it all for a good cause.

Sure, there's been some bumps, but that just gives us more reason to come out and join together to mark this special time of year and create a ruckus with friends… and get your picture with Indie-Rock Santa (as taken by our lovely imaginary photographer extraordinaire Laura Musselman).

Here's a quick rundown of the deets:

Plus, INDIE-ROCK SANTA John Roderick (of the Long Winters)

All proceeds go to Treehouse4Kids.org

Want a taste of what the evening will hold? This year's line-up is going to bring on the holiday hilarity, dance party, and sweet tunes.

Tullycraft:
The band was recently interviewed and performed the end song theme on Seattle Channel's Local Music Show (hosted by indie superhero John Richards). The interview and song came out great (watch here)! The video featured on the show was "Georgette Plays A Goth" which is a must see with it's cute retro animation and hidden nods to vintage zines and fashion styles. BUT, let's watch my favorite live video of them from last year's show in Chicago and their debuting of "Take Away The Make-Up (and the Vampires They Will Die)"

Rachel Flotard (Visqueen) & Jon Rauhouse (Neko Case)
and friends {Bill Herzog, Mark Pickerel, and Paul Rigby}
OK, we don't have any footage of this group of superstars on one stage which speaks to how momentous the night is. We've got sassy Visqueen front-woman Rachel, Neko Case's right-hand man Jon Rauhouse (who's prowess with string'd instruments has lead a Mr. Orchid Fingers moneker) and their friends — the legendary grouping of Paul Rigby (Neko's guitarist), Bill Herzog (in Jesse Sykes band), and Mark Pickerel (& His Praying Hands, Screaming Trees, etc.).

Here's a video of Rachel and the song "Last to Know" (filmed the Crocodile RIP) — doesn't she rock it in the skirt, heels, and electric guitar?

Your Favorite Book
This group is so elusive, they don't have anything on YouTube. You should come and film something and post it. So, listen to some of their songs and you'll be convinced. I love how they combine early Mountain Goats and Neutral Milk Hotel into tasty lo-fi guitar-driven vignettes.