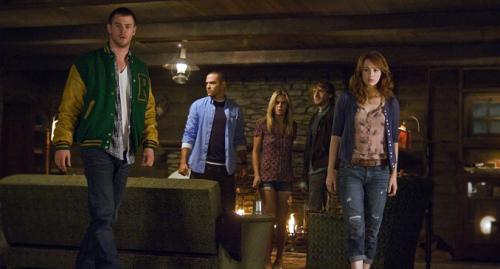 I am terribly behind on this, I know! But it wouldn’t really feel like the start to a new year if I didn’t make some kind of list about the movies I fell in love with. It’s way too tough for me to make a traditional Top 10—so I’m going with the imaginary format I used last year.

Best EVERYTHING: The Cabin in the Woods (Director: Drew Goddard)
I can’t even tell you how much I love this film. And sadly, I can’t even really tell you what this film is about without running it—short of saying that it’s about 5 college kids who go to a cabin for a weekend of fun only to have it turn into a screaming night of terror—which would be doing it an injustice. After watching this 5x (so far) and listening to the commentary twice, I’m convinced that the Whedon/Goddard pairing is a match made in horror heaven. I cannot wait to see what these guys do next! And I hope it’s soon. Really, really, really soon.

Best romantic comedy/drama that felt like it could really happen: Your Sister’s Sister (Director: Lynn Shelton)
Shelton’s finest film to date features a killer cast that folds you right into the story, with Mark Duplass working equal parts charm and stupidity, Emily Blunt emoting one-million different things with just her eyes, and Rosemarie Dewitt being as fabulous as she is in everything. Talking too much about the plot would give it away, so let’s just say it’s full of great surprises and sharp dialog. And I especially loved the completely unconventional ending.

Best brutally honest thriller: Eden (Director: Megan Griffiths)
My love for our local girls is BIG! With Eden, Griffiths manages to tell the story of a young girl who is abducted and kept captive in a sex slave operation with care, thoughtfulness, and minus any sensationalism. Hard to do when dealing with a sensitive subject, and even harder to do when you throw in law enforcement conspiracy and murder. Every frame is this film is beautiful, and every performance is spot-on. Is it hard to watch? Of course. But it’s absolutely worth it.

Best splatteriffic foreign horror: [Rec 3] Génesis (Director: Paco Plaza)
I wasn’t sure about the whole “found footage” bit at the beginning, but I stuck with it—and decided that having a zombie outbreak take place at a wedding reception in a remote location was GENIUS. Panicked bridesmaids, family members biting family members, and the bride and groom getting separated and trying the whole movie to find each other = awesome. Enough splatter, gore, and buckets of blood for miles and miles. My favorite!

Best documentary covering a subject dear to my heart: This one’s a tie between: The American Scream (Director: Michael Stephenson) and Side by Side (Director: Christopher Kennealy)
On the one hand, you’ve got The American Scream, which gets up close and personal with families that run their own Home Haunts. These guys pour every ounce of energy they have (and in most cases, every dime) into creating the perfect haunted house for neighboring kids. I admit: I cried more than a few times. And laughed a whole lot too.

On the other, you’ve got Side by Side, which gets up close and personal with several different directors about the film vs. video debate, as well as covering a bit about the history of film, and describing the differences, advantages, and disadvantages of both mediums. Basically this thing is like film writer crack. I loved it! And want to watch it a few more times to make sure I didn’t miss anything (despite Keanu’s hypnotically monotone narration).

Best film featuring The Hulk EVER: The Avengers (Director: Joss Whedon)
Give me all the shit you want for being a Joss Whedon fangirl, but this guys KNOWS how to write and direct a script involving 6+ lead characters, and he knows how to do it well. I was seriously worried about my beloved Mark Ruffalo being turned into a giant green CGI monster for half the movie, but actually The Hulk was my FAVORITE part. And even though both Hawkeye & Black Widow’s skills were undoubtedly inferior to the rest of the super-powered endowed cast, he did a fine job including them. Kudos, Joss! Now, when is The Avengers 2 coming out again?

Best action flick that met my expectations and then some: Skyfall (Director: Sam Mendes)
I feel like I read a lot of reviews hating on this one, and I don’t really get it. Bond is definitely BACK. And yes, I believe he absolutely would straighten his cuffs and jacket when jumping off the top of an exploding train and entering the next car. OF COUSRE HE WOULD. HE IS JAMES BOND. Anyway! Skyfall was just what I wanted from a Bond film. I loved the dark gritty parts of this one as much as I loved the insanely impossible action sequences, and the sweet, dramatic moments. White-haired Javier Bardem was also seriously freaking me the fuck out, but he didn’t quite win the creepiest villain title this year.

Best action flick that surprised me: Sleepless Night/Nuit Blanche (Director: Frédéric Jardin)
One night of a corrupt drug-dealing cop’s life in which his son gets taken by dealers who got screwed out of a huge deal due to an insane mistake involving the IA agents tailing him. This film is almost non-stop chaos, with shooting and blood and car chases and guys beating the hell out of each other. HIGHLY entertaining!

Best comedic follow-up to a film I love: 2 Days in New York (Director: Julie Delpy)
I think Delpy is brilliant when it comes to comedy, and she really kills it in this sequel to 2 Days in Paris with her perfectly frank, neurotic, French delivery. Chris Rock is also great as her American boyfriend dealing with a parade of visiting family (Julie’s real-life father Albert Delpy makes another appearance in this, and he’s hilarious), and every situation is ridiculously over the top, but still somehow totally believable. I loved the craziness of this! And I laughed so much.

Best use of Tom Hardy’s mumbling/creepiest villain on screen: Lawless (Director: John Hillcoat)
This film isn’t perfect, but that’s mostly because Shia LaBeouf’s character is more annoying than sympathetic. That said, I love me some prohibition drama, and this one is packed with amazing costumes, sets, and performances. The bootlegging Bondurant brothers are doing just fine until a new deputy arrives and demands a cut of their profits. Naturally they refuse, which starts a whole lot of trouble. Hardy rocks it as Forrest Bondurant, the legendary oldest brother with the best cardigans ever, and Jessica Chastain is amazing as a showgirl trying to escape her icky past.

And the villain is the creepiest! I will never be able to look at Guy Pearce in the same way after seeing him as Charlie Rakes with no eyebrows and severely slicked-back hair … and I’m still wondering (but not really wanting to know) what was up with the gloves, the powder, and the prostitute in his room. eeesssh.

That's my list! What'd you guys see that you loved last year? Tell me! I need to build up my Netflix queue so I have good stuff to watch until the sun comes back.