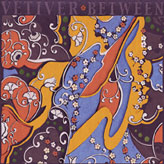 There is a certain kind of grass grown in tropical Asia known as Vetiver that is known for its soothing properties — you might hardly notice it at first, but when its reduced to oil, it can help soothe screaming muscle pain and throbbing joints, casting a mild but profound state of bliss over the one who ingests it.

The band Vetiver is the music of Andy Cabic who, though he has been placed in the dim and sultry avant-solk spotlight by pal and housemate and aesthetic comrade Devenda Barnhart, is worthy of consuming without any knowledge of where it is grown or who cultivates it.

For the second track of this Between album sampler of five soft, mesmerizing melancholy songs, Cabic tellingly covers "Save me a Place" off Fleetwood Mac's Tusk album — and, as bold as this praise might be, I have to admit that Cabic's forlorn, middle-range vocals have the same druggy effect on me as the best Lindsey Buckingham ballad (which this is). It is also a testament to his songwriting ability that I did not notice that it was a cover until after listening to it several times — and then it seemed as if the other material could have been placed on a Mac album in their prime.

Other reviewers are dropping names affiliated with Vetiver like Joanna Newsom, Iron & Wine, Cocorosie, and Animal Collective, which is completely unnecessary. Cabic's laid-back talent is timeless-sounding enough on its own, and even if nothing on this EP startles, it soothes like medicinal weed from a far off wilderness.