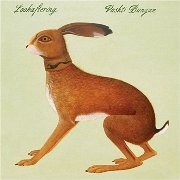 If only Vashti Bunyan had swallowed fistfuls of barbiturates from a goblet of bourbon and curled into a little ball on burgundy silk sheets in her parents' basement after her first album in the late 60s, then her "tunes" would be planting sweet chrome luxury car cruising in your susceptible mind (that is, dying young to sell cars to ya). Instead, she actually retired from decadent London in a horse-drawn wagon (!), taking two thoughtful years to meet her beloved Donovan on the Isle of Skye, where she would end up making art for more than three decades (!!).

Vashti Bunyan is one of those artists that made no fucking sense in her time period. Even though Rolling Stones manager Andrew Loog Oldham was willing to gamble that her very-close-to-perfect fairie folk was a hot money bet in the late 60s, it's taken 35 years for her to have a properly prepared fan-base to descend into. Which it has for Lookaftering, a glowing, majestic Goddess-work of delicately plucked gold-velvet balladry.

Bunyan's previous record was a Joe Boyd-produced gem titled "Just Another Diamond Day," which reminded me less of a female Nick Drake than the sunshine-kissed little sister Nico never had. That post-Stones expression of joy featured sublime musical accompaniment from members of Fairport Convention and the Incredible String Band, with string arrangements by Drake's collaborator Robert Kirby.

A little while ago (once upon a time?) Bunyan received a bashful and vulnerable query from the celestial man-child Banhart, who followed it up with the kind of child-like package of creativity we tremble with glee to get from our punk rock pals missing but mused over. (Cursed internet, that used to happen so much more often.) She saw in the younger man the same kind of gypsy she'd always been, and helped him out on his second album, eventually doing shows and collaborating with Malkmus, Animal Collective, and Piano Magic.

That brings us to the cult mother's eleven song come-back, which sounds like it was created in a chamber somewhere between another century on this planet and a gateway to a dimension where ontological peace is actually possible. Picking out one song, one lattice-covered story from another, isn't really important. Neither is the fact that the album features appearances by Joanna Newsom and Banhart. What makes Lookaftering distinctive is that you feel nothing but Bunyan's singular pure expression when you listen to this, an album that could have been created at any time in the past one thousand years, as long as that creator's soul was beautiful.