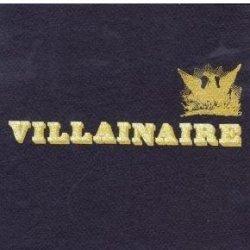 Probably the most cosmopolitan-level avant-garde rock band to ever come out of Seattle, The Dead Science present their fourth album, Villainaire. Tours through Europe and America are planned for this showcase for the inimical elegance of Sam Mickens' soaring and whispered vocals, embedded in the divine rumble and roar of bass (acoustic electric) player Jherek Bischoff and drummer Nick Tamburro. It is easy to imagine crowds in places like NYC and LA and London all witnessing the band brilliantly mash classical and jazz-training to deliver their songs of free fantastic night journeys and saying, "Seattle? Don't they all just have college-boy beards and play either sad-sack art-folk or slow stoner metal there? This is the voice of a fallen god!"

Well, that's probably overstating the case, but not by much. The theme of Villainaire is readily represented by song titles such as "Make Mine Marvel!" and "Death Duel Productions." This is Jack Kirby rock, theme music for new gods, the sort of rock opera the Silver Surfer might make. Or at least Godard if he was a musician in the Oughts and not a filmmaker inspired by Stan Lee comics in France during cinema's New Wave.

As Phil Dick explained, the truth is coded in all the effluvia around us, the seeming "crap" that we love (rock music, comics, science fiction books and flicks). In there perhaps a more profound truth can be found than in the textbooks and the theories that categorize us; and on Villainaire a few listens can get one past the chaos and menace of its orchestrations and into themes of mercy and infinite potential.

From his meticulous writing on hip-hop in The Stranger, it's obvious that Mickens understands that musical genre's inherent use of darkness and reconstruction of time, from its so-vivid-they're-surreal narratives to the unsettling dropping of the one-beat. He uses his appreciation and knowledge of that form to create his own City music, music perhaps created in the first City, the one built by Cain, the first murderer. Villainaire begins with "Throne Of Blood," which starts with random harp runs, clipped guitar, and double or triple tracked vocals, soon zooming in for full attack. That word often occurs to me as I listen to the Dead Science's new record, as poetic threats such as "to restore his flesh the grey ghost must find his bride" and "my body will not tire nor my skin crack" feel Phoenix-like in the middle of all this frantic six string buzz and full-on string bombardment.

The Dead Science borrow some elements from current sources, and evoke certain classic rock bands I'm not sure they intend (I'll flat out say that they may be the best spiritual descendent of a marriage between Queen, Slayer, and Scott Walker you could ever imagine) but the lasting imagery is wholly their own. I picture their sound as the whirring of the wheels on the spaceships the tortured prophet Ezekiel saw in the sky before he warned ancient Israel.

Villainaire is being simultaneously released as a CD, a beautiful 180 gm vinyl LP, and over the Internet. It is conceptually split into two parts, an impaling, affecting first part in which the hero may be wounded and raises his "golden arms out to the sky" in the "darkest drunk night," through a ferocious instrumental assault; and a resplendent, resonant, slower second half, that culminates in a terrifying meditation on the death penalty, "Clemency." One word can mean so much, can't it? Clemency is the difference between life and death, today and eternal doom, and is the one power the shiny Beast holds above all the animals below. Whether that Beast is a god, or the State, or the war the State creates.