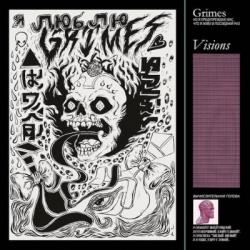 What's up, haterade-makers? Are you ready for the next Wavves or Coco Rosie to dump "comments" scorn on in this city of ciphers? Well, Claire Boucher (who is Grimes) sees herself as Phil Spector per Pitchfork, and the multiple internal personalities she evokes through her Nylon magazine collage of fashion-friendly-but-flirting with sounding roguishly ugly, J-Pop and K-Pop, and astrology-reading cassette-funk, is prime target for chillwave lads imagining their jittery jams have some sort of deeper meaning. (You can start that process by comparing yourself to Phil Spector and not sounding anything like Ronnie.)

I don't know if any in the bloggy woggy boy glitchy gang has any scholarly Scott Walkers (crazy cosmopolitan craftsmen) compared to this expressionist Nico (who used cigarette-scarred vocals to paint romantic distance as Grimes uses sugar-stuffed pixie-sticks from-the-diaphragm sprays). I don't listen to their mates closely enough. I do know Visions is a very pleasant trip through Asian pop plagiarism meets Flying Lizards novelty rock, and if the deeper ideas Boucher espouses in interviews don't seem to quite make it into the sequence, there is historical precidence for enjoying weird stuff for just being weird stuff. Grimes for me falls somewhere far away from Tuneyards' ecstatic, erotic, energizing DIY cosmic body rock, and maybe a little closer to Amy Grant's cute, pure odes to some theocratic order based on a monotheistic editor.

My utterly reductivist wife, walking through the living room while this played, was like "Oh, the new Cocteau Twins." That's a little shorthanded, but my wife really likes the Cocteau Twins, so you know — so what? (Her tone was pretty whelmed.) I enjoy young people making sonic kipple with machines and piling their shrieking and swooning vocals all over the heap, and in certain cases, if they're all Manic Pixie Dream Elf about it, I'm happily entertained. In the 80s we called this fashion-victim shiny-slaughter "grebo" — every generation has its urgent pop overkill from the glossy trenches.

I am a little weirded out how much Boucher sounds like Robert Palmer on "Oblivion" and Stacey Q ("Two Of Hearts") on "Circumambient" and "Be A Body" though. (A sweet dose of Robyn echoes througout, and she says her brother is a fan of hers, so I think a bit seeped in through their adjoining bedroom walls or something.) Also, I have to recommend the latest n+1, possibly the nation's best literary magazine now, which has an excellent article from James Franco (writing with Deenah Vollmer) about how he would spend two hundred grand on horse riding training, horribly blowing out his knee learning fencing skills, just to star in a shitty version of Tristan and Isolde that insantly bombed. For several pages he details how overpreparation never really paid off for him as an actor, and when it comes right down to it (*spoiler alert*) "if you have a part, all you have to do is learn your character's lines."

Because I know I'm going to keep playing this for a little while, but then probably delete it from my stream, maybe next time out an actual Phil Spector type could be brought in, to either allow Boucher to become all the actors she wants to be in her songs, or at least to scare her into being more compelling ones. Because though I often play a couple of songs several times in a row, I know there's not much to hear a year from now.