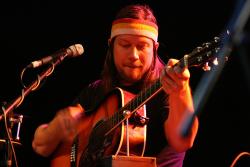 Happy Sweet 16 to the Croc, with Viva Voce

April 30th marked the 16th birthday of the Crocodile Café, and the venue celebrated it Cotillion-style with invitations and corsages. I opted for casual attire (who gets dressed up to see a show at the Croc?), but apparently they were serious about the semi-formal attire thing. The half dozen people who had actually gotten dressed up looked good with their little flowers pinned to their dresses and vests as they wandered about the sparsely populated venue. We took up residence in the bar and bided our time waiting for Viva Voce.

When Kevin and Anita Robinson hit the stage, I quickly realized that Kevin Robinson is probably one of the coolest people on the face of the planet. He’s in a rock band, he can play drums while playing the guitar, harmonica, or the kazoo, he’s good looking, funny, and he rocks a headband like a 1970’s NBA baller. Not only is he cool, he’s lucky enough to be married to a woman who can absolutely demolish a guitar. Three songs in, Viva Voce tore into "So Many Miles" and I’m pretty sure that I saw smoke coming from Mrs. Robinson’s Rickenbacker guitar.

Viva Voce gave their all to celebrate the Crocodile’s sweet sixteen. They even stopped to sing Happy Birthday to the club. Unlike a couple months ago when I saw Viva Voce open for the Shins at the Paramount, I was easily able to move to the front and stand nary five feet away from the band with out being crowded. Everyone in attendance was able to move about freely and enjoy a great show without the rigors of a packed house.

The duo played more from Get Yr Blood Sucked Out while mixing in older tunes as well. They closed the set with “Special Thing,” my personal favorite indie ballad of 2006-2007. Kevin sang “It’s a very special thing/She makes the people clap and sing” and the crowd did indeed clap and sing along to the song he undoubtedly wrote for his wife. They played a two-song encore that featured two other non-GYBSO tracks that were exemplary.

It was an odd event, this invitation-only semi-formal party sponsored by a tobacco company in a smoke-free venue. Viva Voce were undeterred by this series of awkward events and put on a great show. Seattleites will be graced with their presence twice more in the coming months at Sasquatch and then again at the Capitol Hill Block Party. Neither of these shows will offer the crazy circumstances that surrounded Monday’s gig at the Crocodile, but they will feature a great band that consists of the coolest guy on the planet and a guitar goddess. That’s a pretty good deal, even if you don’t get to wear a corsage.