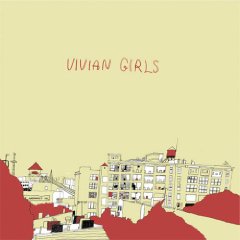 In the Red Records

Being a band championed by the collective blog world is a blessing and curse. The good news for Vivian Girls is that you didn’t have to wait around until Quentin Tarantino put them in a film before hearing of them (and really, did you actually know anyone that really got excited by the 5.6.7.8’s?). The curse is that Vivian Girls are all over the blogosphere. Every song from their self-titled album is (or was) available via Hype Machine (but you didn’t hear that from me) and nearly every review I’ve read has been so adulatory that their value for comparing impressions is largely nil.

Vivian Girls have been all over the internet – but fuck all that. They have the right look (Jenny Lewis bangs) and zip code (they call Brooklyn home), true, but if you consider the attention they’ve gotten online so far, this record is difficult – maybe even impossible – to enjoy. That happened to me the first time I spun this album. The drum fills sounded primitive and basic, one song has exactly one word for lyrics repeated over and over again and the production sounds like it was recorded in a firing range.

Checking your (and my) preconceived ideas at the door doesn’t make those things less true but it does lend to a much more enjoyable experience with this record. It is a fast garage rock record that clocks out after just 22 minutes. It cannot be a coincidence that the singer/guitarist takes on the moniker of Cassie Ramone. What Vivian Girls do well is strip rock and roll down to its most basic elements: guitars, drums, bass and vocals. The guitar parts rely heavily on reverb and it is the most obvious sound you’ll hear but if you listen to the harmonies, you’ll notice that Ramone and her bandmates have really good voices (albeit a sense of nervousness comes through) that make for an interesting juxtaposition against the primal rock instrumentation. “Wild Eyes”, “Where Do You Run To?” and the opening track “All the Time” get the most traction from their singer’s voice. Still, though, the instinct is to make noise and push everything through as quickly as possible, breaking guitar strings and hearts along the way.

“Where Do You Run To?” slows things down considerably and takes its time (it’s one of two songs with a running time longer than 3 minutes) sounds romantic and longing. It has enough room to breathe and you notice the multi-layered harmonies and Ramone’s surf-y guitar lines. Then the tempo picks back up with “Damaged” and drums sound like they’re bashing away again (with the guitar and basslines trying to keep up). “No” is a great kiss-off of a song that repeats its one word lyric repeatedly so much that it’s meaning leaves nothing in the way of ambiguity.

Vivian Girls are a band for the moment not because they were embraced by online music writers (including this one) but because their sound is immediate and to the point. When you hear Vivian Girls you grasp the raw energy right away and it sounds like they are having a blast being in a rock band. They don’t try to impress anyone with their musical prowess but instead act like this is their moment to rock out and they are going to have as much fun as they can while they’re in the spotlight. Their sound appears that it will translate as well on record or in a garage as it would live because they don’t spend a moment to dwell on their imperfections or mistakes; nor should reviewers or critics. Maybe that’s where the brilliance of Vivian Girls. Or maybe it is in the immortal words of an immortal rock and roller who said “I know it’s only rock and roll – but I like it.”