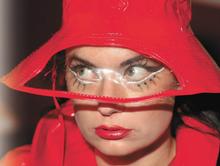 …who knew the result would be so awesome?

Last time we heard from KRISTEENYOUNG, or it's frontwoman, uhh, Kristeen Young, she was getting thrown off the tour from opening for Morrissey because, as Wikipedia diplomatically tells it:

While I'm in favor of insulting Morrissey as much as some of you are in favor of President-elect Obama, she had spent the year since that happened miles away from my radar – until yesterday afternoon when I found a press release in my inbox announcing a duet she made with Patrick Stump of Fall Out Boy. I listened to it this evening and have to admit, it's pretty great.

The wannabe goth kid inside of me loves the way Young attacks her piano the same way Amanda Palmer might on the worst day of her life and Stump's melodies are incredibly creepy – but in a good way. The tension continues throughout the song and gives the sense that Young and Stump are both walking an emotional tightrope that they could fall off of at any moment.

I wish I had a video to embed but the Tubes of You were coming up dry when I looked this evening. Instead, though, you can go to Idolator and download the thing.