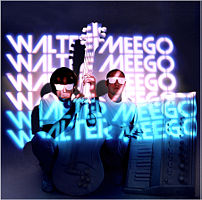 You know the songs that are so catchy they defy even the most hardened music snob's protective web? That's Walter Meego's modus operandi. On their official debut released this May, Voyager, Walter Meego (who are actually two: Colin Yarck and Justin Sconza) lay down slick pop hooks literally oozing with sticky electro sap. Comparisons to Daft Punk are inevitable but there's a playfulness in Walter Meego that set them apart. Operating slightly under the radar, Walter Meego lace their vox/beatmaker combo with delectably sweet vocals and obscure Italian disco rather than the acid house rave style of Daft Punk.

Utilizing a very basic pop formula, verse/chorus/verse/solo, Walter Meego don't hide any surprises behind their back. They don't even attempt to mask their overtly effervescent poppy sound, and they succeed in making a gleeful, if not totally addictive, dance album. Darkly funky "Keyhole" and "Lost" step away from the pretty and distorted chunky bass and into a throbbing, body-rocking club blast. As the album progresses the songs turn less poppy and more dancey, the thundering reverb and squelchy synth more pronounced and less breezy. Listening to Voyager is indeed like a voyage, tumbling through a neon rainbow of blippy beat-driven sonic grooves.

Every band that breaks out of the blogosphere is dancey these days, which doesn't bode well for this more-than-Daft Punk electronic duo. They could very well float out into indie-dance abyss, tossed in amongst all the lip-smackin' one hit fantasms that were good for a second and then their song was featured on a Lincoln commercial. Who's to say that Walter Meego won't meet that fate as well? "Forever", the swaggering first track off Voyager, has already been featured on a Heineken commercial that aired this spring and summer, as well as ABC sitcom "Ugly Betty".

Some critics claim Voyager is an unremarkable rip-off unworthy of it's comparisons, but despite all the cheeseball bass lines and simplistic electro buildups this album pleases. It's a dance album, a pop album and an album meant to be rocked while vaccuuming in the nude.

Walter Meego will play the middle slot at the King Cobra on September 20th alongside Ra Ra Riot and New Faces. If you're jonesin' for a dance party King Cobra is the place to be on the 20th.