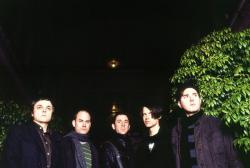 I first heard Voyager One back in 2001 and have always been curious about their live shows, and Saturday night was a perfect chance to catch them along with some other local flavor freshly returning to town. Beforehand, I got excited for the show while listening to the other artists that would be sharing the stage. It seems like all of the bands have clear visions of what they are and express their messages well through song.

Seattle’s the Kindness Kind came out right on time and began the show a bit timidly, but warmed up to the early crowd with a proficient performance. Their music was energetic at times didn't quite fully materialize during their half-hour set. While the Alessandra’s vocal performance was passionate, the band didn't really interact well enough to fully propel their emotionally-tinged rock off the stage and into the crowd. I imagine that a more intimate setting would work better for this band and would truly welcome the chance to see them at a smaller venue.

The Upsidedown’s bridging of rockabilly and psyche rock, or sexy-psyche, is seamless and they really brought it this evening. Jsun Adams’ full and deep vocals poured over the show-goers so much better live than on record; the band reached out and grabbed the venue by the lapels. These lads and lasses were truly a pleasure to watch as their set smoothly progressed from droning psychedelic dirges to full-on rock songs and caused no whiplash whatsoever. The next time the band makes the short trip to Seattle I will certainly be there and get my friends to come with me.

The groovy two-man Head Like a Kite had a strange droning and electro/clash feel to them, yet they were all about the party. Imagine the more uptempo songs from Her Space Holiday or even Eno with dashes of Gang of Four or even Urge Overkill interspersed to add flavor and emphasis. Trent Moorman’s phenomenal drumming is unbelievable, making transitions within transitions and constantly progressing the song patterns forward. I was absolutely transfixed on his skills. The band's excitability was infectious and only occasionally crossed the line into cheesiness, and then only briefly. You can’t be faulted for having a good time.

By the time Voyager One took the stage the room was virtually full, awaiting their epic brand of rock to wash over the crowd with their luscious rolling music as art. The most intriguing aspect of their music, live and on record, is that the sounds never overpower each other even while growing to a critical mass, and this tradition continues on the new songs played live from Afterhours in the Afterlife. The performance was laid back yet driven and conversely purposeful, full of long droning tones and pulsating bass. While most shoegazer bands tend to lull the listener into a dream state, Voyager One’s music has a way of propelling the the audience forward to higher plains. Projectorhead’s visual display provided the perfect accomplice, adding yet another layer to the dense concert experience.

This entire show had more cohesion than most planned national tours out there. Each band stood on its own merits while also preparing the audience for the next band throughout the whole evening, creating a feeling of unity for the entire show. I came away from this show with a few more bands to get excited about going to see, as they were all talented and put on quality performances.