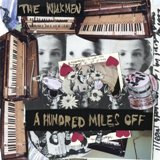 A Hundred Miles Off and 'Pussycats' Starring the Walkmen

The Walkmen have been busy little beavers in 2006. Two full-length albums for our enjoyment and they couldn't be more different. One is made entirely of sprawling originals (A Hundred Miles Off while the other is a song-for-song remake of a classic 70's album ("Pussycats" starring the Walkmen). They each has its own merits and flaws, especially when you have to compare to their last album, Bows & Arrows that might be one of the peaks of the '00s indie music. However, an only OK Walkmen album is still much better than most of the music heard on the radio these days in the first place.

It is abundantly clear that Hamilton Leithauser, lead singer of the Walkmen, loves Bob Dylan. His vocals on A Hundred Miles Off, the album of all originals, border on undecipherable at times, slurred and dirty, but that's part of the charm of the band. Opening up with "Louisiana," you can tell right off the bat that the Walkmen want to have that sound of recording in a warehouse, full of echoes, distortions and imperfections. The song itself is actually quite beautifully arranged with intertwined guitars, pianos and horns, but never takes off. You can feel it building to something, but then it just ends. This is a recurrent event on A Hundred Miles Off, almost as if the songs are only half there, none seem to have the focus of classics like "The Rat" from Bows & Arrows. Both "Danny's at Your Wedding" and "Good For You's Good for Me" almost get lost in their own deformation, as if they were recorded in one take with Leithauser half in the bottle, and while it had its charms, leaves the songs lacking any cohesive center. There is a little more focus on "Emma Get Me a Lemon" (my vote for favorite song title of the year") but the best aspect of the song is a strong presence of the Walkmen's drummer, Matt Barrick. The Walkmen are one of the few bands that the drumming stands out, and Barrick is in top form on "Emma…" with thick rolls and foot stomping thunder.

If anything, A Hundred Miles Off is at least a sunnier, cheerier sound for the Walkmen. "Lost in Boston" is almost downright fun, with lightly strummed guitars filling in between the crashing drums. I would love to point out some lyrics, but after Leithauser's initial "Lost in Boston/drinking rum and chocolate/a hundred thousand blinking lights are making me exhausted," darned if I understand much else. If only they could have focused a little more, the new mood could have really shown through, but sometimes the looseness gets a little overboard (e.g., "Always After You (Until You Started After Me)") and bordered on outtake material rather than a finished song.

The flipside to the A Hundred Miles Off anarchy is the Walkmen's song-for-song remake of Nilsson's Pussycats. Here, suddenly the band has morphed into a later-day Afghan Whigs. Leithauser sounds disturbingly like Greg Dulli on the opener, "Many Rivers to Cross" (and you can actually understand his vocals. Go figure.) The original Nilsson album is half covers in the first place and has a reckless abandon that one might think would be hard to recapture, however, the Walkmen do an excellent job of not just rehashing but re-invisioning the album. It seems vaguely amusing to hear the Walkmen sing "Subterranean Homesick Blues" considering they perform it in such a non-Dylan fashion when compared to the sacrifices to the Dylan altar on A Hundred Miles Off. This amusement continues on "Save the Last Dance," which takes a great 70's ballad into a drunken plea. Leithauser transforms into a poor, abandoned lover, practically channeling a less raspy Tom Waits into the vocals and when you put those vocals over the languid piano, echoed drums and barroom harmonies, the song takes on an entirely new life. The same might be said for "Loop de Loop," that sounds like a lost Springsteen outtake recorded deep into a drunken party night. Not all of the album works, many times the covers sound a little too by-the-numbers (such as "All My Life" or "Mucho Mongo"), but is mostly made up by the oddness of tracks like "Rock Around the Clock" that is tackled like any good post-Sex Pistols band might hack at Bill Haley.

Overall, the Walkmen have had a good year. They released two pretty darn good albums, neither are classics, but they are a lot a fun. If I were asked at gunpoint which album was better (and I'd love to hear any examples of how this situation could arise…), I'd probably lean towards Pussycats starring the Walkmen for its quaint strangeness and more spontaneous but still focused feel, but A Hundred Miles Off is no slouch in itself. In any case, it still makes you pleased to see that as of late 2006, the Walkmen are already proudly proclaiming they are recording for their next disc. Yes gentlemen, go forth and multiply!