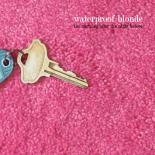 The Morning After the Night Before

Waterproof Blonde's website leads with a quote from that well-known leading authority on the St. Louis 'entertainment community' Night Times that reads "…there's a fair chance that Waterproof Blonde may not stay underground for that much longer. Remember where you read it first! " Further reading of their promotional package offers up several more media quotes along similar lines including: "…custom built for modern rock radio" and "…a band we'll be hearing about for years to come", and "…you'll see these guys on MTV as early as tomorrow…" etc., all from local rags and with no national or mainstream media quotes.

Now I'm not saying that, upon a debut release, a band might expect such coverage, but the quotes chosen by their label/promoter Crash Avenue (of which Waterproof Blonde's bass player Jeffrey Smith is President, incidentally) perhaps indicate an overreaching ambition or desire. Indeed the band's other website at MySpace describes their genre as 'Indie/Powerpop/Rock' and lists Foo Fighters, PJ Harvey, Yeah Yeah Yeahs and The Strokes as artists they sound like. PJ Harvey and Yeah Yeah Yeahs? Really?

Of course I probably wouldn't be mentioning this if Waterproof Blonde were indeed remotely close to being the next PJ or Yeah Yeah Yeahs — or even the next No Doubt for that matter (to which they clearly aspire). However, upon listening to The Morning After The Night Before, the next No Doubt they most certainly are not.

As we have come to expect these days, Waterproof Blonde put one of their best feet forward on The Morning After…, with the opening and airwave-friendly "Hold Me Down". While it has a good beat and riff and singer Rachel Hagen can certainly crank out good vocal line, when the song and band burst into full stride for the chorus, the sound becomes muddied and Rachel's voice is almost completely swallowed — so much so that I found myself twiddling iTunes' built-in mini-equalizer to try and hear her better. A few of the other tracks on The Morning After… also have potential. On "Collide" Waterproof Blonde do a pretty good job at the standard rock-ballad format. And on a rerecorded version of "Supermodel Craving", the single from an earlier EP, they show the solid guitar rock form that apparently first got them some airplay on the local college circuit.

However, almost everything else here doesn't sound like much more than filler, and with the poor production values continuing for the whole disc, it's hard to see their dream of appearing on MTV 'as early as tomorrow' coming true with this album to promote them. Indeed, for a band that claims to have been formed in 2003 and yet has not been able to keep a core line-up beyond the duo of Jeffrey and Rachel (they are already looking for their 3rd drummer and 6th guitarist), they have their work cut out for them.

If Waterproof Blonde wish to get noticed in a mainstream rock genre already overcrowded with mediocrity, they'd do well to not continue imitating 'indie' in the way No Doubt are indie, just without uniquely magnetic Stefani. Since Rachel Hagen is no Gwen Stefani (nor Polly Jean or Karen O for that matter) they'd do far better to find their own musical voice instead of trying so hard to sound like everyone else. Ironically they save such a song (and their best) for last on The Morning After… with the short but fast and punkish "Tackle Queen" (worth a whole bonus TIG point to score in of itself).

Now if Waterproof Blonde had got themselves the right producer and instead put out a four-track EP with the best four songs on this album, then maybe they might have had a chance of a mention in the Alternative Press or Q magazine, rather than (I fear, quoting Rachel in 'Hold Me Down') "…wasting (their) youth selling illusions of grandeur."