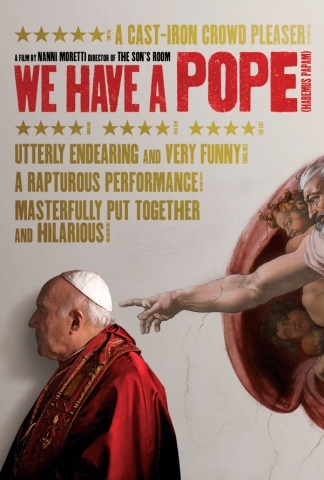 We Have a Pope

When the Pope passes, all of the catholic churches Cardinals gather within the Vatican to choose their next spiritual leader. Vote after vote is taken until a consensus emerges. The honored recipient being a far from obvious choice – emerging as an out of nowhere compromise candidate. Which might have something to do with all the other Cardinal's fervent prayers not to be elevated to the papacy. The vote's conclusion signaled via coded smoke to the faithful massed outside awaiting this reassuring message of continuity.

With throngs of reporters trying to get a scoop on what's going on – in a manner reminiscent of a sporting event or Kardashian sighting. Around this process lies fertile ground for comedy, both slapstick and ironic. There's a touch of that (for example the lights going out and church members insisting nothing is wrong, as well as a confused Vatican reporter). Though it's low-grade compared with the mostly sweetly handled existential crisis that the accidental Pope has to deal with. I smiled throughout the film, but never really was engaged enough to recommend the final result as must-see cinema. Though it certainly has its charms and likely will be a winner with segments of the viewing audience, who are not me.

After his selection, the new pope (Michel Piccoli) gets almost to the balcony where he will address the crowd. An ear splitting scream suggests something is wrong and there is. The new Pope won't go through with it. Church officials hope a cooling off period, and then perhaps a psychologist might help. Eventually Piccolo finds himself wandering through Rome revisiting either his life that could have been or just experiencing life in the messy wonderful world outside the Vatican walls. Either way, he delivers a strong performance that's believable in an unbelievable situation. I could talk in more detail, but the best parts of the picture are experiencing the slowly paced ride and the characters. So I won't delve any deeper.

I struggled to understand what I didn't love about the film. After a fair amount of thinking I've decided that it just felt too mild. While there's a sweetness and heartfelt nature to the exercise, the punches are pulled and the humor is subpar. At least it was for me. There is a pleasantly subversive sense to everything. From a room full of cardinals begging God not to choose them as pope, to the hiring of a non-believer divorced psychiatrist whose not allowed to ask the reluctant pontiff anything of significance. And of course there's the paradox of the infallible leader of the church being told his decision not to be pope is wrong. All in all a pleasant, if personally underwhelming, experiment. One which I cannot picture rushing out to see in a theater given other more engaging options. But that's just me…