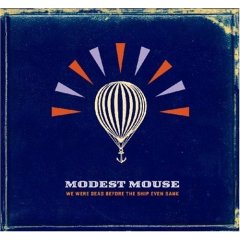 We Were Dead Before the Ship Even Sank

"We've got everything down to a science," Isaac Brock sings. A decidedly un-creative thing to say, no? It seems to imply that Modest Mouse has taken on a formulaic approach to their music, that they mix A with B to get C. It leads one to fear the new record for what it might sound like. Or rather, what it won't sound like, which is Modest Mouse.

Since The Lonesome Crowded West in 1997, these Washington natives have regularly enchanted fans with cathartic, growling rock that balanced perfectly between too strange and too normal. Even when they made the leap to the majors with Moon and Antarctica, they remained stoically on the move: a band never relegated to a particular "sound."

Their plague lies in the taboo subject of rock and roll: selling out. When Moon…'s "Gravity Rides Everything" appeared in a car commercial, cries of "Judas!" could be heard far and wide. How could they? A commercial? The plain truth of it is that by nature, fans of independent bands — because they must put some personal effort into being a fan (as records are harder to find and there isn't always easy access to them on the radio or in popular culture) — do not want to share. "I've earned the right to love this band, while you, watching Monday night football, have not." Cynicism abounds in rock and roll, no matter how many people say it does not.

But since the music of Modest Mouse remained fantastic, just as out there and eccentric as ever, their fans — for the most part — got over it. Hey, the band's got to make money too. It's not like they were raking in the dough from singles like "Dramamine" and "Jesus Christ was an Only Child" (although many would argue that in a perfect world, they would have).

Then a little song called "Float On" from the release Good News for People Who Like Bad News got played on KROQ. It got played a lot. And, defying everyone's expectations, Modest Mouse became the hottest new band in the country, despite having released their first single eight years previous. But again, the music persevered, excelled even, and while there undoubtedly were the most cynical and annoying of fans who stopped calling themselves Modest Mouse fans so as not to be associated with O.C. fans, the bulk remained.

Now the follow-up to Good News… roars with the news of none other than Johnny Marr joining the band as guitarist. Johnny Marr: one half of the Lennon-McCartney duo of the eighties, The Smiths. He remains perhaps the most credible of rock guitarists, and even if you hate Modest Mouse now that they're plastered on billboards and construction yards and iTunes banner ads, you have to be at least curious.

Scared it will suck? Yes, most longtime fans are. The single, "Dashboard," recalls disco lights and throbbing bass, and a guitar line that's exactly what one would expect from Marr and Brock's styles thrown into a blender. Unfortunately (yes, unfortunately) "Dashboard" does not offer a good example of the rest of We Were Dead Before the Ship Even Sank. Not even close.

Having Johnny Marr in the band now, not only as guitarist but also as songwriter, has naturally had its effect. Gone are the more eccentric instrumentations, for the most part — "Dashboard" being the most immediate exception — that peppered the length of Good News…. Back comes the guitar-guitar-bass-drums instrumentation. And why not? You've got the guy who wrote the riff to "This Charming Man" in the band.

The 14 tracks extend and contract in traditional Modest Mouse fashion: "traditional" for this group being that the album is full of surprises. Good surprises.

"Little Motel" might be the most elegant song the band's written, and is wholy unexpected. "Steam Engenius," however, follows that soft, lush love song with the type of barking Isaac Brock lyrics that have been adored since the first record: "I was born in a factory! Far away from the milky teet!"

Likewise, surprises come in the form of "Missed the Boat," a slick pop-song along the lines of a new Death Cab song, with a traditional verse-chorus-verse format and nothing less than a Ben Gibbard-esque melody. But on the other hand, the track "Spitting Venom" offers eight and half minutes of sharp-edged, rodent rock: it's a painful, painful song, full of all the ups and downs that give Modest Mouse this emotionality that's absent from most all popular music.

But the best aspect of the new Modest Mouse record is not a particular song, or the delicate solos with which Johnny Marr occasionally obliges the listener. It is not the best Modest Mouse record, and at the place they are in their career, it will be hard for Modest Mouse to ever put out a record that could warrant being called "their best record." For most fans that will always be an argument between the first three records. It's not the best, it's just another.

No, the best aspect is that this record debuted at number one on the billboard charts. A Modest Mouse record is, for at least this week, the most popular piece of music in the country. With so much else going wrong — and I realize the trite naiveté of this point, but please, take off the Rationality Hat for a moment and revel in this — more Americans are buying a Modest Mouse record than any other record out there. Democrats have the Congress, and Modest Mouse have the charts. There's something beautiful about that.