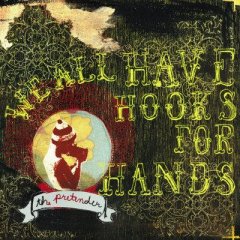 We All Have Hooks for Hands, hereafter referred to as Hooks for Hands for brevity’s sake, are probably the biggest thing to explode out of Sioux Falls, SD since, well since probably ever. The band, which has enough players to fill the Mariners’ starting roster and could probably pitch better, play surprisingly stripped-down, low-key sunshine pop reminiscent of early Shins combined with the choral sensibilities of the Polyphonic Spree.

The Pretender is a healthy mix of straight-ahead indie pop mixed gently with acoustic subtleties, quirky keys, and the occasional trumpet. The band shines on tracks such as “Jumpin’ Jean-Luc,” which cleverly combine electronic, acoustic, and toy instruments. When the band can control the sheer power of nine people strumming, kicking, picking, and blowing on a multitude of instruments, the potential energy (a science refresher: a huge rock propped on the top of hill, but not yet rolling has potential energy) of these understated tracks create a truly moving experience, such as the brief, 49-second “The Teeth That Feed the Lions.”

However, the band’s nine members can occasionally step on each other’s feet, such as in the aural mess that is “Elvis ‘MF’ Christ” and the bloody-knuckled untitled track that closes The Pretender.

When the band can pull all of their elements together they create rich, layered songs that carry themselves in a very cinematic and vast manner. The track “Hold On, C’mon” features very defined performances from the troupe, giving the song an orchestral quality. Hooks for Hands is a very good example of the potential many members can give a band. In an age of guitar and drum power duos, they are a breath of fresh air – a band that can intricately paint a picture rather than splattering one out in two colors on the canvas.