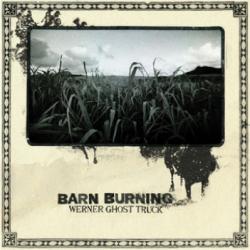 Werner Ghost Truck, the second release from Providence, Rhode Island’s Barn Burning, sounds at times like it is indeed inhabited by spirits, and its strength lies in the almost hollow sound that the band achieved by recording in a big, empty house in New England in the middle of winter. You can hear the resonance of this chilly emptiness in these songs, and they would make quite an appropriate soundtrack for a winter night by the fireplace.

The band’s sound is like a more sullen version of The Decemberists, with instrumentation that’s sometimes reminiscent of The Elected and lyrics that tell lush, elaborate stories. It’s rooted in alt-country but strays enough from the confines of the genre that it earns its indie stripes as well. The album doesn’t knock you out on first listen, but instead slowly grows on you as you make its acquaintance. Once you’ve fully embraced it you are enraptured.

Werner Ghost Truck opens with “William” — presumably about the same William to whom the album is partially dedicated — a story-song that employs harmonica and piano during vocal breaks to help portray its subtle sadness. Next up is the stark “Crossing the Rubicon,” which isn’t a particularly pretty song but does mark its territory and calls to mind Boston band The Motion Sick. As the song winds down, it merges via guitar feedback into “Long Dark Room,” a slightly slower song with a lap steel guitar that tears at the heartstrings while radio frequency noises are embedded in the layers of instruments. Again, songs fade into each other as “Long Dark Room” becomes “October 5,” a song in which spooky piano notes personify the ghostly part of the album’s title, which itself segues into one of the album’s proudest moments, “Put the Drunk Drivers On the Guest List.” “And it’s like wrapping gifts half-drunk on Christmas Eve / Passing out inside the room where you were conceived,” sings Anthony Loffredio in a song about emptiness and longing — or at least, one that sounds like these things.

“Friendship Fails You” continues this vibe with toy piano and violin. A chorus of harmonic Oh Ohs is dramatically enhanced by surprisingly low male background vocals in the vein of Jens Lekman’s “Pocketful of Money.” The pace is picked up with the next track, “Flailing,” probably the most poppy and Decemberist-y track on the album, and one of the strongest. “The Final Days of Our Better Days” slows it back down and features one of the only vocal departures on the album, in which Loffredio effectively jumps an octave, creating a tender vulnerability not before heard. “The Send Off” then continues on this path, fading into “February 28” — a sequel of sorts to “October 5” in which spooky piano again creates a bridge between songs (both tracks were recorded on a Panasonic voice recorder to achieve this sound) — and finally, “Winter Palace” launches with guitar strums and organs setting up the album’s longest and last track. It's a multi-dimensional piece, with harmony vocals, instrumental variety and a lingering moodiness.

The downfall of Werner Ghost Truck is that Barn Burning are really good at what they do… but maybe they do a little too much of it. Some of the songs are fairly similar; the ones that break the mold are the ones that will stay with you after the fire goes out.