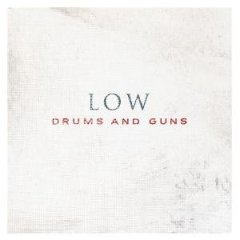 Drums and Guns, the eighth-full length album from Duluth MN’s Low, is a slow march through a fresh battlefield of creeping beats, electronic melodies, and hymn-like vocals. The arrangements float like bedroom reflections, and at times verge on the cinematic.

The album pulls heavily from the band’s earlier, minimalist sound that has influenced countless bands to date, but is more radiant and layered than Low’s 1994 debut I Could Only Live in Hope. Some of the album’s jerky and melodic electronic loops could pass as Postal Service material, but Low delivers them in their trademark slow and deliberate fashion.

The album’s theme of silent urgency are shown in vocalist/guitarist Alan Sparhawk’s lyrics, which are delivered like an appeal and are filled with the sage-like tone of a soldier’s letter from the frontline. The entire record moves like a heartbeat, gently pulsating yet at times reaching the brink of racing.

The disorientating harmonies of Sparhawk and his wife, vocalist/drummer Mimi Parker and haunting orchestration drive the reflective nature of tracks such as “Belarus” and “Violent Past,” and on songs like “Sandinista” the couple’s vocals hasten and rhythmically flow like a Gaelic ballad over a military snare drum cadence. “Always Fade” and “Hatchet” break away from the album’s sluggish pace and move at a slightly quicker, yet always collected, speed.

While Drums and Guns partially succeeds in creating a mood of reflection and introspection, it at times seems long-winded and redundant. A good example of this is “Dust on the Window,” a track that is rife with anticipation, stretching like a sprinter but never taking off.

Longtime Low fans will appreciate Drums and Guns’ return to subtlety, and new fans will be attracted the band’s obvious influential sound. However, the sedated attitude of the record will leave some craving more drive and emotion.