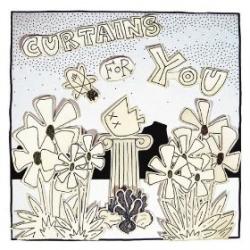 What A Lovely Surprise To Wake Up Here

This Seattle-based British Invasion-meets-Beach Boys five-piece initially got my attention by being named (probably coincidentally) the same as a title by one of the very best power pop bands of all time, The Only Ones. But Matthew and Mikey Gervais (guitar/lead vocals, guitar/sax vocals, respectively), Nick Holman (bass, something called a euphonium, vocals), Peter Fedofsky (piano/vocals), and drummer Dave Lawrence share more than that in common with Peter Perrett’s legendary punk era quartet. Though Curtains For You may have never heard The Only Ones, both groups are deliciously excessive in using 60s melodies to swoon and soar some really dark shit they sing about. And the backing band action is cracking tight on retro riffs and rhythms.

What A Lovely Surprise To Wake Up Here is the follow up to their debut Heaven’s Waiting, which this site voted one as of the best of the region’s releases not so long ago. Describing Curtains For You, it’s not so surprising that they have been featured on KEXP, as their sound is both hook-filled but archly expressive. Thing is, Matt and Peter go half and half on the songwriting duties, yet the overall excellence makes it hard to separate their work from each other. The entire first half of the new ten track sophomore release is non-stop relationship-as-Vietnam mood with chorale harmonies crooned, and that horrid cliche about “getting better with each listen” becomes alarmingly true as one listens to Lovely Surprise. “Nuclear Age,” “Dead World,” and “Dumb Angel” could be depressing vignettes of baby falling down, over and over again, if the musical jangle and spank didn’t distract from the tragedy told.

On the fourth track, “Title Bout,” things get a bit more aggressive and messy, ending “side one” with the snarling “Chain Link Fence.” The sheen of the vocals, vocals, vocals (no, seriously, look above at how many people in this band sing) drops off a bit and a certain rawness is exposed. Unfortunately, my least favorite track comes next (“Roadtrip To Disaster”), but it could just be its poppy exuberance is a charade to get the pop-punters back in the flow (and start the second half off with something less biting).

Taken together, the final five tracks aren’t quite as cohesively stylized as what came before, but that’s not a criticism. The best one here, “Small Change,” taps into an unexpected punk-klezmer style for more caustic storytelling, and makes one clamor for more diversity from Curtains For You on their next release. I am going to confess I OD a little on all the sweet singing, as I play this album on repeat. But that’s just it — every time I play it I repeat it several times. What A Lovely Surprise To Wake Up Here has honestly restored my faith in real, well-played, sizzling good post-teenage pocket symphonies to God. It’s in my own top ten of the year for sure.