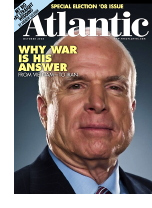 What could possibly go wrong when you hire the "Manipulator"? I agree with Vanity Fair's James Wolcott when he writes on his blog, "Based on the coarse, cheapshot, meretricious campaign McCain has run thus far, he's forfeited any respect beyond the minimum norms of discourse."

The editors at The Atlantic Monthly apparently disagree. They hired a photographer named Jill Greenberg to shoot (photos of) John McCain for their October issue. Greenberg jumped at the opportunity and used it to shoot embarrassing photos of the man who loves to remind us he was a POW and we weren't.

Greenberg took some photos of McCain that made him look like the villain in a horror movie (which, I guess he actually is), tricking McCain into posing for an unflattering image. She told Photo District News:

She delivered the image the magazine asked for—a shot that makes the Republican presidential nominee look heroic. Greenberg is well known for her highly retouched images of bears and crying babies. But she didn’t bother to do much retouching on her McCain images. “I left his eyes red and his skin looking bad,” she says.

After getting that shot, Greenberg asked McCain to “please come over here” for one more set-up before the 15-minute shoot was over. There, she had a beauty dish with a modeling light set up. “That’s what he thought he was being lit by,” Greenberg says. “But that wasn’t firing.”

What was firing was a strobe positioned below him, which cast the horror movie shadows across his face and on the wall right behind him. “He had no idea he was being lit from below,” Greenberg says. And his handlers didn’t seem to notice it either. “I guess they’re not very sophisticated,” she adds.

Greenberg took the photos The Atlantic didn't use and got creative with Photoshop and put them up on her own website, which is called Manipulator. She had yellowed his teeth in one image and gave him fangs and blood dripping from his mouth.

The Atlantic is pissed, too. Editor James Bennet issued a statement saying:

We stand by the respectful image of John McCain that we used on our cover, and we expect to be judged by it. We were not aware of the manipulated and dishonest images Jill Greenberg had taken until this past Friday.

When we contract with photographers for portraits, we don't vet them for their politics—instead, we assess their professional track records. We had never worked with Jill Greenberg before (and, obviously, we will not work with her again). Based on the portraits she had done of politicians like Arnold Schwarzenegger and her work for publications like Time, Wired, and Portfolio, we expected her, like the other photographers we work with, to behave professionally.

Jill Greenberg has obviously not done that. She has, in fact, disgraced herself, and we are appalled by the manipulated images she has created for her Web site of John McCain.

Greenberg said it was pretty "irresponsible" for The Atlantic to hire her because her opinions on the Bush administration and the Republicans who enabled it are not exactly a secret (and probably pretty close to 90% of people I know).

I guess the only thing I find upsetting about this is that McCain will try to use this for sympathy (and campaign donations) on the exact same day he said that "the fundamentals of our economy are strong" (which is the exact same day that Lehman Brothers filed for bankruptcy protection).

Gawker has some more of the photos from Greenberg, with and without the Photoshopping and captions. (via Slog)

This photo was not taken (or Photoshopped) by Jill Greenberg: