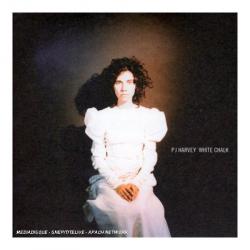 By this time in her career, Polly Jean Harvey is becoming one of the “elder statesmen” of modern rock. She has been recording music since the early 1990’s and now, Polly Jean is now fast approaching 40 and maybe some of the fiery angst that propelled Rid of Me has softened with the years. White Chalk might be Polly’s most stripped down album under the moniker of PJ Harvey, right down to the stark album cover with Polly in a white dress against a dark backdrop. The outcome is PJ Harvey’s starkest and most haunting album of her career.

If anything, White Chalk is like Nick Cave & the Bad Seeds’ The Boatman’s Call: a deeply personal and betrays a surprisingly fragile side of the artist. Like the The Boatman’s Call, White Chalk is also musically restrained, relying a simple instrumentation and arrangement, reaching back into British folk music for inspiration. A perfect example of this is “Dear Darkness,” a beautiful ballad that is built on piano and brushed drums where Polly sings with a gentle, hushed voice – this single song captures the overall tone of White Chalk. “When Under Ether” is another excellent example, with more rhythmic structure but still feels like PJ Harvey performing music while hypnotized, drifting in and out of an unconscious state of delirium. Polly’s voice has rarely been as ethereal (no pun intended) as on “When Under Ether.” In fact, throughout a lot of White Chalk, you might be hard pressed to recognize Polly’s voice when compared with the deeper vocals she is known for from her early albums. Now, this restrained persona does not always come together, such as “Grow Grow Grow,” which merely feels underdeveloped rather than stripped down effectively. “Broken Harp,” similarly, feels more like an outtake than a fully realized song.

The title track is a gentle and gorgeous song that might be one of the most challenging songs on the album, marking a very dramatic change from the PJ Harvey oeuvre. “Silence” commands your attention throw dissonant harmonies and anxious piano. It seems appropriate that PJ Harvey would have a song called “The Piano” on White Chalk considering how much the instrument dominates the arrangements. The song is one of the most accessible tracks on the album, but is still startling with the trills of piano and gently strummed guitars underlying the melody. The album closes with “The Mountain,” one of the finest tracks on the album, like a musical twilight as the mist rolls in around you.

White Chalk is one of the most demanding albums PJ Harvey has released, forcing listeners to slide into the melancholy world that has been created, wrapping its ghostly sounds around you like the shadow of night. While it might not make all PJ Harvey fans happy or garner much airplay, it is one of the most satisfying, taking Polly into avenues she had not traveled. This is all you can ask for from an artist, to challenge the notions of their craft.