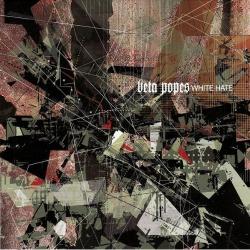 The Beta Popes are going to destroy you. A Power Doom trio, The Popes are what happens when three Jazz heads form a Death Metal band. The result is a crushing sound that will sunder your soul and reduce you to rubble. With Bobby Previte (drums,) Jamie Saft (guitar) and Skerik (vocals and saxophone) you’d expect things to be a bit less sludgy and a bit more jumping. But no, the Popes are not Jazz. They’re METAL. IN ALL CAPS, BABY. They’ve been born of Satan to deliver the world into a new dark age of frogmen and carrion crows and no one can stop them. They don’t care if you like their music and, quite frankly, probably want you to go deaf listening to it.

Besides being Death Metal played by Jazz heads, Beta Popes is an unusual band, in my opinion, because of the instrument and vocal assignments. There’s nothing strange about the guitar/drums/vocals setup, it’s who’s on them that’s different. I know Saft for his organ and keyboard work, not his guitar, let alone Metal guitar. The sound of it is like butter being churned in the pits of hell, with a rusty iron rod. But stranger than Saft’s guitar are Skerik’s vocals. This is a recurring problem I have with Skerik. He’s one of the best saxophone players I have ever heard, but finding him actually playing the saxophone can be a bit difficult at times. He often filters his horn through various electronic effects, giving us a saxophonic sound, and that can be hard to distinguish from other electronic atmospherics of his main band Critters Buggin’. But here, I’m even more confused by his place as vocalist. Skerik! What are you doing man? A Death Metal band with a deep, resonant sax blast is just what the doctor ordered. But no, instead, we have his warped and distorted vocal delivery, buried pretty deep in the mix. With a sax man like Skerik in the band, it seems like a waste to put him on something like vocals. With the Beta Popes, Skerik does play the sax occasionally, but it’s on the high and squalling end of things, and not too coherent.

But this isn’t Skerik’s show; it’s Previte’s. The drums are like a brick wall breaking apart and falling down all around you. They’re the most dynamic element of the music, as Saft’s guitars get a little too repetitive. I have no real technical drum knowledge, but I know what I like and these are some thunderous beats that Previte’s chunking out. The album these men have created is far from what I would call accessible. It’s four tracks, but 50 minutes in length. The shortest take, “Burning Witch”, is roughly 7 minutes long. The three main pieces of the album, “Zondervan”, “Kabla” and “Chalice of Death” are all over ten minutes long and they love to grind. There isn’t much variation here and “Chalice”, at nearly twenty minutes, is a lengthy, tough listen. Ironically, it’s also got the fastest tempo of any of the tracks.

The basic formula is this: Previte lays down a beat, which is subject to alterations, Saft layers his thick guitar lines on top of that and Skerik howls his heart out somewhere in the middle. It’s not the sort of thing you’d expect from these musicians but it strangely works. If you like Avant-Garde Death Metal, then this stuff is for you. If you like your music to have pop sensibilities or melodies, I suggest you look elsewhere.