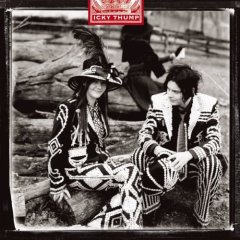 {Much like the late Carl Sagan and I.S. Shklovskii with Intelligent Life in the Universe, TIG has discovered that two can indeed be better than one. In that vein, we bring you the White Stripes’ new album, Icky Thump, reviewed tag-team-style by me [Erik Gonzalez] and me! [Betsy Boston]. This is truly a momentous occasion, spanning from sea to shining sea. So as to make your life easier, everything I [Erik] say about Icky Thump will be in italics, while everything I [Betsy] say will stick with good ol’ standard type. Maybe the White Stripes are just too big for one reviewer to tackle these days, but either way, expect fireworks!}

ERIK: Icky Thump is good. There, I said it. Note how I said its “good,” not “great,” not “ghetto fabulous,” not “a pile of lark’s vomit” either. It is good – I’ve listened to it multiple times and I enjoy it – it rocks when it needs to roc,k and it shows that Jack White really knows how to wield his axe. However, that being said, it sure is White Stripes like every other White Stripes album; if you don’t like the Stripes by now, there really isn’t anything on Icky Thump that will change your mind.

I would agree for the most part with his statements above, and add that I find Icky Thump to be more classic White Stripes (if there is such a thing when talking about a band whose first album was released less than a decade ago). I’m delighted with the songs on Icky Thump that are stripped down, like the title track — with it’s ferocious Atari-esque guitar effects that this Atari devotee happens to adore — and “Baby Brother,” “Little Cream Soda,” “Rag and Bone,” and “I’m Slowly Turning Into You.” True, the effects set these songs apart a little from De Stijl-era Stripes, but essentially, these songs eschew flashiness in favor of classic rock riffs and beats.

ERIK: The album sure does start off with a kick. The title track is a little more focused than the noise that opened their last disc, Get Behind Me Satan. Whereas “Blue Orchid” sort of just didn’t feel right, “Icky Thump” is genuinely White Stripes, even with the prog-rock guitar noise that comes out of Jack’s guitar. By no means is it the showstopper that was “Seven Nation Army,” but it is solid Stripes. Quentin Tarantino is clearly salivating to be able to use “Conquest” in his next film. It is so B-movie soundtrack fodder, with its blazing horn section and Jack’s truly bizarre attempts at being a crooner… and oddly enough, it works. The Stripes other sojourns into world music, the oddly Gaelic “Prickly Thorn, But Sweetly Worn” and “St. Andrew (This Battle Is In The Air)” more or less fall on their faces.

BETSY: Yeah, I’m really not sure what to think of “Conquest” — it is so totally bizarro! [What Erik, keeper of our copy of liner notes, didn’t tell me at first is that this is actually the album’s only cover song. Now I understand.]

Good call on the Tarantino envy, I’m sure you’re right. It’s like some kind of Western movie battle scene soundtrack; I picture gunfights and gringos and maybe a donkey or two. But I quite like “Prickly Thorn, But Sweetly Worn.” I theorize that this is a byproduct of Jack’s time spent hangin’ with Loretta a few years back. It’s got an Appalachian mountain banjo music backdrop — and bagpipes? I’m not sure without liner notes to confirm, but it sure sounds like some subdued bagpipe action. And for the sake of clarification, “St. Andrew (This Battle Is In The Air)” is musically a continuation of “Prickly Thorn, But Sweetly Worn” in which the tempo is slightly accelerated and some noisy effects added alongside a spoken-word track that sounds neither like Jack nor like Meg (it’s possible that it is Jack on helium). Someone with the liner notes handy could possibly explain. In any case, “St. Andrew…” isn’t a song intended for isolated listening, as I interpret it; it’s more of an epilogue to “Prickly Thorn….”

ERIK: There are a couple of songs that might be my favorites by The White Stripes ever. “A Martyr for My Love for You” is a nearly perfect White Stripes song, blending the subdued melodies of the verse with a rocking chorus and bridge. Why this song works over some of the other examples of the “typical” Stripes song on the album is unclear, but it has a little more life and kick than some of the by-the-numbers tracks (see below). “Effect and Cause” is more stripped down than most of Icky Thump, almost like you might expect from “The White Stripes Unplugged,” it really has the sound of Nashville where they recorded the album.

BETSY: I like “A Martyr for My Love for You” too, and “Effect and Cause” reminds me of their cover of Loretta Lynn’s “Rated X” (ok seriously, Jack’s got it bad for Loretta). “Effect and Cause” may actually be my favorite track on the album. It’s followed by closer “Baby Brother,” which challenges it for that distinction. Funny, as the two are quite different stylistically. Oh, but before I go picking favorites, I can’t forget “You Don’t Know What Love Is (You Just Do What You’re Told),” which has a smooth bluesy feel and flow, and “300 MPH Torrential Outpour Blues,” which brings it down a notch.

ERIK: Jack is clearly enamored with the sort of bluesy loud-then-soft songs akin to “Ball & Biscuit” from Get Behind Me Satan. “300 MPH Torrential Outpour Blues” alternates from huge guitar noise to a nice gentle, blues number. “Catch Hell Blues” is the same thing, with Jack freaking out on his guitar for four minutes. Personally, I like it them because they have a lot of drama mixed into the songs, but it can seem formulaic. Therein lies the root of the problem with The White Stripes – so many songs just sound like yet another White Stripes song. This problem is somewhat paradoxical because The White Stripes tend to be quite good, but when you have songs like “Little Cream Soda,” “I’m Slowly Turning Into You,” “You Don’t Know What Love Is,” “Rag & Bone,” and “Baby Brother” that are pretty much interchangeable with other songs on other Stripes albums, you know you might need to diversify a bit.

BETSY: Ha. One igMan’s “interchangeable” is another igWoman’s “delightful” — but it’s true, if you’ve never been sold on Jack and Meg, you’re not going to suddenly be enamored by Icky Thump. And I’m never going to understand how you can not like them. We’ll just agree to disagree.

ERIK: My brain has a lot of trouble trying to wrap itself around an opinion of Icky Thump. On one hand, it is an excellent album because it is The White Stripes and they really know how to make rock ‘n’ roll. On the other hand, is it really that different than the other White Stripes albums? In other words, is the band making any real progress musically? I lean towards the answer being “yes” but there is an air of complacency to the album that I can’t seem to shake.

BETSY: I applaud them for managing to stay true to their sonic identity since day one, despite the enormous change in the size and scope of their audience from 1999 to present. They’re global superstars, but look, they’re still Jack and Meg. I love that. Here in music critic land, how often do we read and/or write about a craptastic sophomore effort from a band that blew us away upon its debut? I’d argue that The White Stripes haven’t yet released that crappy follow-up,
and that’s BECAUSE of their continuation of their true sound, versus some attempt at reinvention and glossy overproduction every time around. They throw in new embellishments and ideas here and there, but ultimately they keep it real.