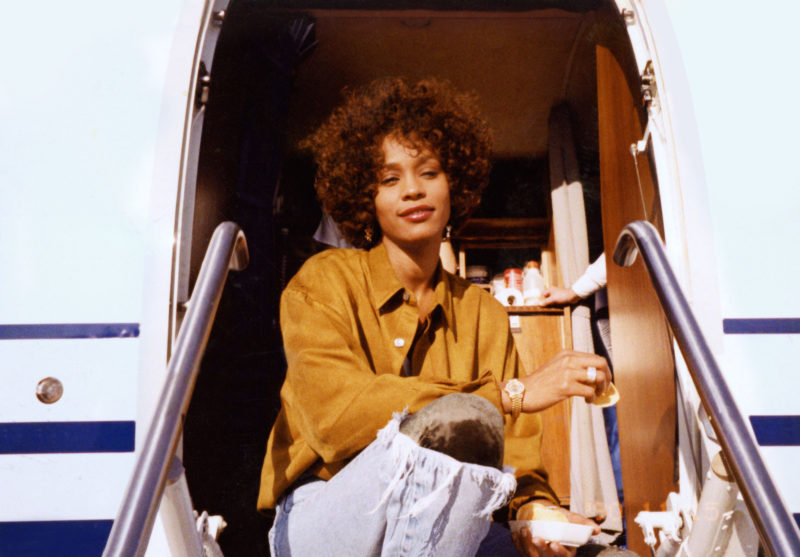 I’ll admit that before seeing Whitney, I only had the broad strokes of who Whitney Houston was in my head: 80s hitmaker; The Bodyguard megastar; wife to a toxic, abusive husband; that awful “Crack is whack” interview with Diane Sawyer; and a tragic death caused by years of drug abuse.

Director Kevin MacDonald starts this doc at the very beginning, with Houston being born into a family of soul and gospel icons (her mother, Cissy Houston, sang backup for Elvis & Aretha — and won two Grammys). Whitney grew up singing in church, with her mother “grooming” her to be a musical superstar. Which, I mean, with THAT VOICE, there’s no way she couldn’t be.

Through interviews with Houston’s family and friends, we get a glimpse into the pressures she faced from her parents to keep practicing, and keep pushing. While older family members seem to have a more rose-colored view of Whitney’s childhood, her brothers reveal a more shocking truth: including an allegation of abuse from a close family member which caused them all to start dabbling with drug use in their early teens.

And then we get to the interviews with Bobby Brown. This f*ckin’ guy. Alive and well, and in total denial about how and why Whitney died, “I’m not going to talk about the drugs; that’s not why she’s dead.” Brown seems to imply it was her family that killed her, and while I’m sure that pressure was part of it, the footage shown of Whitney & Bobby together tells a pretty clear story of how being with him sent her sliding further down the hole of addiction.

That said, there is a lot of information included does point to Houston’s family taking full advantage of her fame, including when her father sued her for 100 million because she “owed it to him for making her” (gross). And then there’s Robyn Crawford: Whitney’s decades-long best friend and rumored lover, who was seemingly the only person who actually tried to help — but got ousted once she gave Houston an ultimatum about Bobby – “Either he goes, or I go.” And so she went.

It’s a fucking tragic tale, and one we’ve seen repeat over and over again. In fact, we see it repeat within the documentary with Whitney and Bobby’s daughter Bobbi Kristina Brown, who was also addicted to drugs, found in a similar way her mom was found, and died when she was only 22.

While it’s not exactly a fun watch, I’ll still encourage you to see it because I think MacDonald did an excellent job showing us the many facets of Houston, and it’s worth knowing who she was beyond those broad strokes I mentioned above. I also appreciate that he didn’t insert his own opinions into the film (à la Nick Broomfield) — BUT I’m still left thinking that a documentary about Houston directed by a woman of color would be more insightful.

Here’s hoping I find out someday …