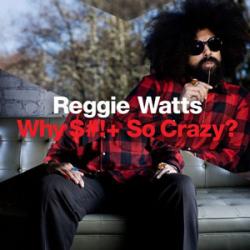 Some comedians talk about taking mushrooms and having cosmic experiences (we miss you, Bill Hicks), and some artists make music that sounds great if you’re either on psilocybin or simply amped on free flowing imagination. Comic and musician Reggie Watts is like a giant fungi who giggles in several dimensions as we chew on him, soaking in visions like Philip K. Dick making Houston Screw mix-tapes while playing chess with God.

His buffet of expectation-shattering humor (sounding like a Medieval bridge troll just when you expect him to tell a ghetto yuk), vocal effects-based bloops and beats (it’s 50 percent spoken word and 50 percent run through a sampler or gizmo box), and shrewdly if synapse-shredded observations are all unique by themselves, let alone woven together into one dipped bone. His sudden riffs include: the standard rap objectification of women’s bodies smashed into the pile-up of popular culture (“[email protected]<% $#!+ Stack”); people gorging noisily on junk food while trying to watch a movie in the theater (“Future In The Future”); putting too much homegrown in the batter even if “No one ever died from paranoia” (“Muffins”); and just laying out his entire life and travels on the lengthy centerpiece “My History Thus Far.” Watts wads layers of TMI and stuffs them into the bong of DIY, creating and performing everything himself. And he lights it with universal illumination.

Though I saw Maktub, his deep grooving Seattle band from a few years back, bounce a crowd, I never imagined the heights of solo creativity he was achieving when I caught him at Bumbershoot last year. It was the high point of the festival for me, his spontaneous noise-making and rhythm-routing and acidic philosophical ruminations freaking everyone out in few minute chunks loosely called “songs.” This combination CD/DVD is not quite as stunning as catching him in the flesh, but the spirit remains, and repeated listening will bore deep into your brain. But never “bore” like boring! “Bore” as in: Dig in.