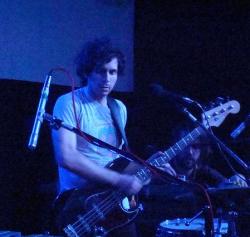 Why? and Mt. Eerie

Having never been to The Vera Project, I was unsure of the crowd I would face when I showed up for the Mt. Eerie/Why? show. Would I spend the evening drowning in a sea of adolescent snobs, wearing the hip new fashions and dropping the fancy new lingo? Would they seem cooler than I ever could have been at that age, before I could depend on alcohol to make me seem sophisticated? Or would I spend the entire evening cursing their beautiful youth, secretly wanting to go back to my good old days with the knowledge I've gleaned from years of crap jobs and cockiness?

Imagine my surprise when the kids, like the song says, were alright. No, not merely alright, but respectful and considerate and endlessly enthusiastic. It probably helped that the show they were attending was phenomenal.

I arrived at the Vera early to meet up with show photographer and all-around rad girl Heather B, and spent a fair amount of time standing in the line at the door with Seattle's indie youth. Maybe it was the skinniness of their jeans that made me jealous of them, or how perfect their thick-rimmed glasses looked. Something set me off, so I begged Heather to grab a drink with me. When we got back, Mt. Eerie was already into their set, but my fears of invalidity were mostly settled.

Mt. Eerie was strange. Their set looked largely improvised, their songs selected from a giant fold-out sheet of lyrics while videos of antique home movies played in the background. They were quiet – unbelievably so. Which was great, except I couldn't get into them.

Main attraction Phil Elvrum and a female singer (who I believe was previous opening act Julie Doiron, but I missed her intro) harmonized well and bantered graciously with each other between songs, but there wasn't much of an emotional connection present. Their set sounded like Low if you removed the rootsy soul in the singer's harmonies and any trace of distortion. I was certainly in the minority as the audience hung on their every note and whispered vocal. I'll concede that I wasn't in a quiet mood.

Which is why Why? blew me out of the water.

Much is made of Yoni Wolf's lyrics and delivery, his quasi-rapped vocals that come off both ironic and earnest in the same poly-syllabolic phrase. He's certainly got a gift for words, as his almost-rhymes were in top form. But what makes Why?'s live show so fantastic is their instrumentation, the richness of the sound they produce and the almost effortless way they produce it. Percussion was split between Wolf and his brother, Josiah, in the same song, employing multiple drum kits, shaking maracas and lots of xylophone. Watching Yoni sing the chorus from "The Hollows" while tapping out a tricky rhythm on his snare was fascinating as a sheer display of coordination, never mind that the song is catchy as hell. Throw in lots of electric piano and some deep electric bass and you've got serious musicality on display.

They did a one-song encore to their Alopecia-heavy set, the hip-hop referencing "By Torpedo or Crohn's", bantered with the audience and left. I would have paid a substantial sum to keep them playing into the night.

Of course, Thursday night was a school night, and I had work in the morning. And so we split, me and the kids. I to my spreadsheets and Starbucks, them to their homework and impossibly-fast text messaging. But I think somewhere in the Vera Project we made a connection, and I'd certainly rock out with them again.

If they'll have me.