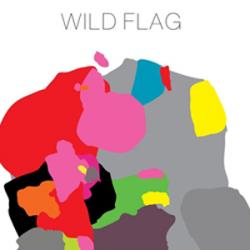 Wild Flag is a rock album that needs to be in everyone's playlist this year, as it constantly excites and snuggles up to the listener with openly emotional attempts at romantic music-fandom bonding ("Romance"), twists and turns about feeling hot and cold with mysterious scratches ("Something Came Over Me"), whilst a whole lot of skittery guitars tweak and even psyche-chug above Weiss's skin-rattling fury. It's boss.

Sounding as fresh as a debut by a Go-Go's era femme-powered new wave band made up of grown-up punks, all of those great garage gal voices bringing to mind glories recent (e.g. The Woods, by S-K) throughout, but also the brutal, passionate art-pop rants of Lene Lovich ("Boom"), and even early 70s feminist rock ("Glass Tamourine"). Dub bass notes dangle with Elastica-sharp guitar tones ("Short Version"), and all out expansive American Patti Smith-esque rock anthems spill towards the end of the ten track full-lenth ("Race Horse," "Black Tiles"). It never holds back, tapping into poetic blues bluster as much as synthy, snakey post-punk come-ons. It's a dirty, happy, dark rock and roll album. It's got a sweet face and creepy tattoo'd hands with black painted nails slithering up your white t-shirt. And it wants to dance and have some fun and there just might be a little danger involved.

The self-titled debut (and hopefully not first and last album) by Wild Flag does bring up some questions about supergroups. You get plenty more for your money for sure, as eight of these ten tracks seem like great seven inch singles and the other two are expanded twelve inch deep dish cuts all on their own. And you don't need to memorize the pedigree or back catalogue to appreciate the immediate, fusing genius. Opener "Romance" is a heart-warming ode to inclusion and Le Tigre-style love between artists and fans and fans to fans and artists to artists, and it's far too late to describe horny, playful, literate rock made by adult women as "empowering" (that story was confirmed by 1981, at least in my generation).

But I do wish there was a "Modern Girl," something a bit more stripped down and a lot more vulnerable, a change of flow in the blast. I love it all in my face, it's great, and this love letter to several decades of ace underground rock-for-rock's-sake is irresistible. Think more of The Cars (a bunch of great vets resetting their controls to refresh) than the New Pornographers (a mad scramble of new boots and contracts), and the steady quality of the songwriting won't be any let-down. And those voices, oh.