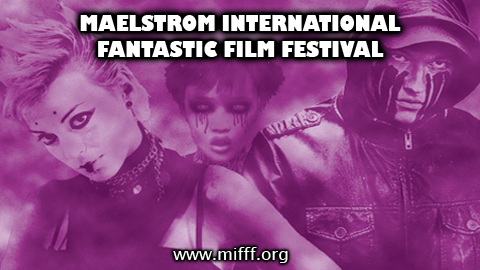 MIFFF – SO many films to choose from this weekend!

Starting this Friday there will be a ton of genre films appearing at SIFF Cinema as part of the Maelstromg International Fantastic Film Festival (Imaginary Amie has already briefed everyone of the general coolness involved). I've checked out a number of films, and am hear to vouch for the offerings as well…with notes on a few things I've already seen.

One thing I haven't seen yet is the opening night film – hope to see tons of folks checking it out with me Friday night.  I'm a sucker for a vampire romp, and Friday night's feature Midnight Sun didn't make it into the stack of screeners the organizers were kind enough to share for review.  I especially don't want to miss it. given Summit Entertainment's propensity for suing everyone in sight. Since that's the same name given to Stephenie Meyer's unfinished retelling of Twilight from Edward's point of view (no….seriously… please stop laughing …. I'm not making this up – and it's not as bad as it sounds) I figure it's only a matter of time before someone tries to shut 'em down..

Without further adieu, here are a few of the selections I've screened and some notes on them. One spoiler alert up front – you don't want to miss the closing night film The Selling: a supernatural comedy/mystery which will appeal to a broad audience. 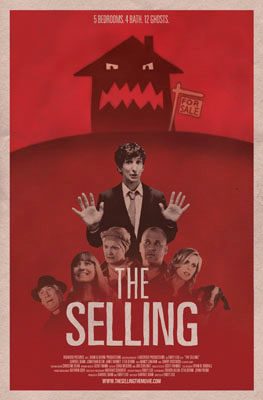 The Selling –  was definitely at the top of the list of the MIFFF films I've seen so far. It's a suspenseful yet amusing tale sure to make whatever your real estate travails have been seem modest in comparison. When Richard Scarry (Gabriel Diani), the unusually ethical real estate broker, finds himself needing to unload a haunted house, his skills and morals get pushed to their limits. Both by the financial need to unload the house ASAP to help pay mom's medical bills and his less constrained partner Dave (Jonathan Klein). This house isn't just a little bit maybe haunted. It's a full on "get out" whispering, blood oozing from the walls, furniture throwing poltergeist infestation of the not quite departed. Not to mention the closet that periodically becomes a portal to the other side. Damn, I hate when that happens….

Scarry and Dave are tricked into buying the house as a flip from fellow agent Mary Best (Janet Varney).  Best is the lesser villain of the piece – though I suspect it's the sort of situation where you'd feel differently if she was your agent.  It doesn't take long for the pair to notice the problems.  They knew it was owned long ago when they purchased it that it was long ago owned by an alleged serial killer.  What wasn't expected is that his victims might still be lurking about.  Nor that an ancient unnamed evil force might be waiting for an opportunity to do less than nice things to the new owners.

The Selling isn't super scary, and absent any significant gore. But it still got a start out of me here and there. First time director Emily Lou brings together a great visual look on what I expect was a small budget.  Producing a smart, funny turn on the (likely) new genre of real estate horror story. 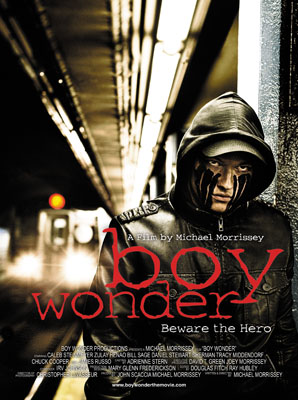 Boy Wonder – takes the form of a traditional origin story familiar to anyone who with even passing familiarity with super-hero lore. No, no. Not the one with a radioactive spider. The one where a parent is brutally murdered in front of a child's eyes. Leading to a burning desire for revenge and a yen to protect the innocent. Superpowers be damned…

Sean Donovan (Caleb Steinmeyer) is a quiet, straight-A student with the sad history of having mom killed during a carjacking. He lives with dad, a recovering alcoholic who wasn't a positive influence before mom's death. Sean still visits the police station to look through mug-shots. At least when he's not hunting criminals on the streets of New York – on the down-low obviously. His skills? Training in martial arts, a few collapsible batons weapons and a steroids habit to take things to eleven.

One thing should be made clear – this isn't Batman.  Meaning there's a strong sense of jeopardy every time Sean mixes it up on the street. Which often starts with him taking on Rocky's strategy of getting the crap beat out of him before he gets the upper hand.  But got to admit, there's a visceral kick the first few times he puts a scumbag down. This isn't a fairy-tale for kids. Even by modern real life super-hero stories, the film feels black from the beginning. Without the played for comedy bits of Super or Kick-Ass. After a while writer/director Michael Morrissey really drops the hammer to deeper into true darkness. Which I don't mean in a negative way.

There are some weak points – most notably for me some of the police dialog and tired tropes. But overall the performance by Caleb Steinmeyer and some of the twists and turns made the experience satisfying. As I mentioned it's a dark tale that may leave you frustrated. But at least in my case not at all bored. 'nuff said 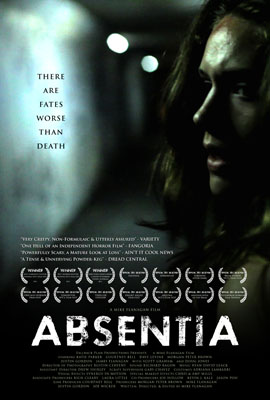 Absentia – this is the feature true horror fans are likely to want to take out for a spin.  The setup? A husband has gone missing. Years ago. Recovering addict and newly Christian sister (Katie Parker) comes to visit just in time to declare husband "dead in absentia." Oh, and the older sister is pregnant by an initially undisclosed man. So all is just slightly weird. Until the mom to be starts having crazily creepy lucid dreams with the zombie like body of her dead husband scaring the crap out of her.

Meanwhile we can't help but notice the dread inspiring tunnel under an overpass nearby the house. At first with the help of a shrink she begins to convince herself it's all a natural hallucination brought on by the stress of declaring him dead. But as if to prove the Scientologists right that theory brought about through rationalizing psychiatry proves very, very wrong.  Or does it?  The film toys with the audience for a fairly extended time giving you either (a) an explanation brought about courtesy of an ancient unnamed evil living in a dimension adjacent to the tunnel or (b) something just rationally fucked-up.

I won't go much deeper into the story as I wouldn't want to ruin the slow burn lead-up to the final craziness for folks who want to see it. I'll admit this sort of scary, creepy outing isn't generally my cup of tea. For me I'd put this in the interesting but not unbelievably awesome category.  I definitely was scared, though the fear is mixed with a good number of moments of talky boredom.

For the most part the filmmakers have done a very effective job of doing more with less.  Almost everything is done with suggestion vs. in your face monster CGI.  Just a little bit of effect is used to go a long way.  Though there was definitely a point where I could have gone for some more variety in dread inspiring music.  Many of the outdoor scenes are quite nice looking, though some of the indoor shots involving people just chatting have a harsh digital camera feel.  Indoor action scenes have a strong energy that does tweak quite a few strong emotions, enhancing engagement with the film.

To summarize: Lots of creepy. Lots of ick. An ending that points to how we rationalize the strange hiding ourselves from the evil that lurks just out of sight. Which doesn't make for entirely the most satisfying conclusion. But does somewhat follow the HP Lovecraft model of story construction.  OK – well maybe not exactly.  But it's also not not Lovecraftian either… I didn't feel a strong connection to the film, even as I respected a good amount of what it did.  If you're a horror fan this isn't a film I'd suggest you skip.  Everyone else – I think it's less mandatory. But not something I would go out of my way to avoid either.  If nothing else you'll learn the amazing extent of research one can do on ancient unnamed evil on Wikipedia.

That's it for the three features I've seen.  There's also a whole mess of shorts worth watching. Three standout examples include 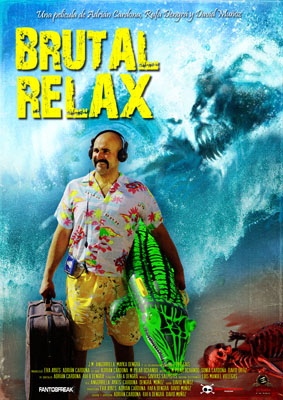 Brutal Relax – which has gotta be the pick of the festival for fans of over the top gore.  It's a beautifully shot film depicting amoral mayhem at the beach. Crowds are either gonna love or be insanely offended by the the non-stop kill-fest.  Not to mention one weapon of choice towards the middle of the melee.  It's a rather creative set of brutal endings against a peculiarly fragile set of sea monsters.  Splatter fans who enjoy extremely over the top altercations are definitely gonna dig this one. Also – best vacation snapshots since The Hangover.  Really earns it's brutal designation.  It may have gone on a bit too long but there are worst crimes.  It's super worth watching on the big screen – but if you want to cheat it's actually available online.

Arthur – A child named Arthur left along dresses up in tin foil and a burger king quality hat and goes on an adventure in the upstairs of his home.  Which magically transitions into a true Camelot-esqe world with the boy now a man in chainmail armor.  All innocent fun – or is it… Once you think you get what's going on the thing screws with you head again again.  And maybe again once more.  Very effective.

Lonely – The festival's description of Lonely doesn't quite do it's craziness justice.  But just to share here it is "Lonely is a young man whose mysterious friend, Bodgie Bob, makes him a deal to change his life for the better. Years later, when promises made aren't promises kept, Lonely falls for a young woman and must stand up to Bob in order to be with her and claim his life back."  I'm not going to explain what the crazy twist is – but I will say I went from mildly curious at the start of the film to a full sense of WTF by the end. Which is intended as a compliment.