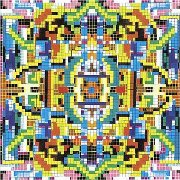 Sometimes it is hard to get excited over a pop record. They are pretty, fun, and easy to listen to. But there are times that this lack of a 'challenge' seems to cheapen the listening experience; the listener is left yearning for something with substance. Then there are many bands, like Wilderness, that dispel this theory altogether.

The Baltimore quartet Wilderness has emerged from the studio to release their debut, self titled full-length. They're a pop outfit that offers sinewy guitars weaving through sanguine, tom-heavy drums and vocals reminiscent of a madman preaching from the mountaintop, attempting to warn the town-folk sleeping below. The end result is a sound all of their own: a mellow, space-pop that could be compared to bands such as Public Image Ltd, Lungfish, the Talking Heads and Les Savy Fav.

There's a symphonic element to this release. Songs tend to build, becoming more purposeful or aware as if they frantically need to come to terms with their own morality in the few minutes allotted to them. Listening to these tracks gives you plenty of space and fodder for thought and daydreams.

The guitars seem to strive for the stratosphere only to be firmly rooted by subtle bass lines, tribal beats, gun-like snare shots, and a wash of crash cymbals. In the midst of all of this are Johnson's vocals, with his howl-like delivery of insightful, introspective, and somewhat apocalyptic poetry. This recording is instantly captivating. Wilderness have released a very impressive debut.

What is lacking, however, is diversity. In building their own sound, it seems that they may run the risk of hemming themselves in an air-tight trap of their own insidious design. Where tracks such as "Arkless" and "End of Freedom" bring you to life and make everything around you a bit brighter, "Post Plethoric Rhetoric" and the five minute plus piano solo "Mirrored Palm" can seem pretentious and unrealized. Despite these slight blemishes, the album is an awe-inspiring first release that is bound to make many a listener's top ten list.