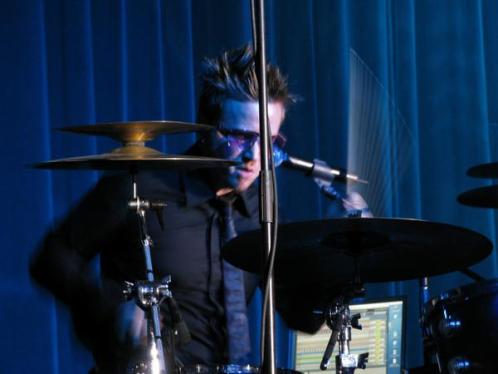 The exalted Elvis Costello once opined “Writing about music is like dancing about architecture.” With all due respect, anyone who’d fail to recognize that his given name of Declan McManus is light years cooler than any other moniker he could muster clearly doesn’t have all the answers. Moreover, Mr. CostelloMcManus has probably never had the pleasure of hearing Kevin “KJ” Sawka play drums.

I first became familiar with KJ Sawka in 2001 when he was playing in a superb trio called Siamese. It’s easy to oversell a performer and render the experience of seeing them for yourself anti-climactic. Nevertheless, I immediately came to realize that what my friends were telling me was absolutely true — the things that Sawka can do with (and to) a drum set are nothing short of amazing. I can still recall thinking of a memorable line from the propaganda-fest known as Rocky IV: “He’s not a machine — he’s a man!!”

Utilizing live drums and a smattering of electronics, Sawka crafts a full-immersion musical experience. He not only delivers mind-blowing beats, but, with a relatively minimal toolbox, triggers everything from bass lines to the light show. Exceptional as they are, you can keep your Jason McGerr and your Matt Cameron — KJ Sawka just might be the single most impressive drummer the Seattle area has ever produced. And having toured the world as a member of Australian drum & bass luminaries Pendulum, Sawka returns home to rock our socks off once more. He’ll be joined by Partners in Grime, Splatinum and DJ Keano at Neumos on Wednesday, May 4.

Like all that’s not enough in and of itself — we’ve got a pair of tickets to give away to the show! Drop a line to us at tig {at} threeimaginarygirls {dot} com with the subject line “SendMeToKJSawka!” sometime before 3p on Monday, May 2nd. We’ll pick a winnner Monday night and get you on the guest list (+1) for Wednesday’s show. Good luck!