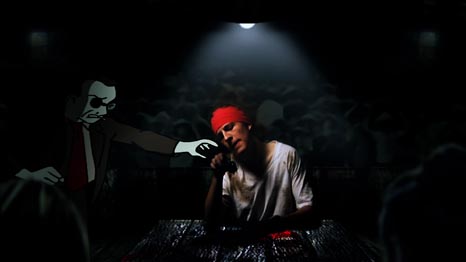 Win tickets to see My Suicide at SIFF

SIFF just asked me if I wanted to give away some tickets to My Suicide, and how could I say no? I haven't seen the movie yet but I know that the program guide says:

“My name is Archibald Williams and I’m going to kill myself.” Archie, a 17-year-old media student announces that his final school video project will be filming his own suicide. As teachers sound the alarm, calling in shrinks and threatening expulsion, students around the school are alternately repelled by and attracted to Archie as he captures his own postmodern “Catcher in the Rye.” Archie’s video diary of the circus surrounding his announcement exposes the truths of life, which include death, sex, violence, drugs, and the hypocrisy of the modern media, which assaults all teens. Director David Lee Miller spent four years working with his son Jordan and lead actor Gabriel Sunday to create this affecting portrait, which authentically addresses the epidemic of teen suicide. The performances from the young cast are flawless, setting the foundation for My Suicide to celebrate and question Generation YouTube with its calibrated commentary of manipulated footage, animation, and 1950s-styled PSAs. Miller’s film is a lightning bolt into a hot topic that struggles to be understood. Through his command of the variety of media used by teens, he has crafted a film that will be a part of the discussion for years to come.

The film also features music from Rocky Votolato on its soundtrack (and I hear that he will be at the screening, along with the film's director, David Lee Miller). The film screens on Wednesday, June 10 at 9:30pm at Pacific Place.

If you want to see My Suicide at SIFF, just e-mail [email protected] before 9am on Wednesday, June 10 with "My Suicide" in the subject line and we'll notify you shortly thereafter if you've won tickets to the screening that night.

Check out the trailer here: