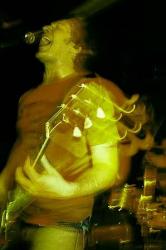 With a Bullet at the Blue Moon

You know those nights when you just don't.wanna.go.anywhere? I was sitting at home a couple weekends ago, embodying this sentiment: on the couch, enrobed in my favorite fleece blanket, cat on lap, "Jeopardy" on TV, glass of wine in hand. But I'd previously made plans to go with my guy to see his pal's band, and I felt compelled to keep my word. Plus, this would be my first-ever adventure to The Blue Moon Tavern — a Seattle watering hole that's hosted countless artists and louts alike over the years. I figured I'd better muster the energy just in case this was the only chance I'd get to frequent this nostalgic locale.

I'm so glad I rallied, because the night ended up being one of those Ultimate Seattle Nights. You know, the kind that could've been last Saturday or a Saturday 20 years ago. The kind where the bands and the faces change, but nothing else seems a smidge different from how it woulda been in 1987 or 1971.

The place is a slice of Northwest life — its wood-washed walls plastered with tattered and smoke-stained posters and paraphernalia. Scraggly booths full of scragglier looking patrons. A rack of moose antler perched on the wall. A hand-carved bear statue adjacent to the stage. There was even a flannel or two bellied up to the bar. Oh, and of course, floors sticky with on-tap beer.

Juhu Beach was supposed to open, but had to cancel at the last minute to welcome a new bundle of joy to one band member's family (Congrats!). Heavy-hitters Madraso were the last-minute filler, and they obviously had enough time to make a few phone calls pre show as quite a handful of fans were in attendance. Their manic drumming and frenetic energy kicked off the night like a shotgun blast, Madraso sounding like a band that could just as easily have been on the bill with the numerous hardcore bands that used to play the now-defunct Velvet Elvis.

Next up were With a Bullet, hailing from Yakima and my guy's friend's band. Now don't get me wrong — those two descriptors could be interpreted as disclaimers. But With a Bullet are legit. Guitarist/frontman Justin Woodall wails on the vox and six-string, leading the three-piece through Jesus Lizard- and Nirvana-inspired material from their latest, This Is the Sound It Makes. Drummer John Marvin thrashes the skins with impeccable precision, crisp and thunderous at times, while Bryan Kerth's fingers rock on the bass.

With a Bullet plowed through their set amidst a strange interlude where a random tavern-goer proceeded to walk up to the stage and faux-kick Woodall in the shin for no apparent reason. I blame the aforementioned surplus of beer. The rollicking rock resounded off the woodgrain walls, splitting eardrums and hair in its wake.

With a Bullet's feverish set helped me forget that just three hours earlier I had no intention of leaving the house. But by the time the second hard cider was through me, my eyelids were drooping again and it was time to bail. Too bad, as headliners American School of Warsaw looked to be drawing quite a crowd. Until the next blue moon.