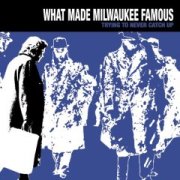 Trying to Never Catch Up

What Made Milwaukee Famous is the latest act to come out of Austin, TX and cause a nationwide buzz. Their debut album, Trying to Never Catch Up (which just re-released on Barsuk Records), is a collection of 12 songs that mix rock and pop at their core, with a large dose of melody and plenty of video game synth riffs to make the album as fun as it is powerful and dark.

Trying from beginning to end brings so many different sounds that it's easy to forget it's all the same band. The first track "idecide" starts with a frantic synthesizer running up and down the scale joined by the rest of the band playing with an understated yet haunting approach of delayed electric guitar, a repeated bass line, and a simple drumbeat. Lead singer Michael Kingcaid drops in at the 43-second mark and immediately channels Thom Yorke's signature end-on-a-high-note phrasing. The song grows over the next five minutes and eventually morphs into a driving, crunchy guitar rock song with synthesizers laid out everywhere.

The next track, "Mercy, Me" finds Kingcaid leaving the high registers and delivering a spot-on Julian Casablancas impersonation. The song is less of a straightforward rocker than "idecide" but it has a brooding energy that keeps things down until the third and single best track on the album, "Hellodrama." The very first lines are understandably cliché but sadly relatable, and they'll hit you right where it hurts: "If you're ever anywhere round here/just come back, I'll give you everything you need this time/I promise/not so much the way you hurt me/it's more like/the way you make me want to hurt myself." Something about the music is irresistible; it makes you forget everything else but the unbearably catchy synthesizers, handclaps, and general power pop perfection.

But the album starts to slowly lose a bit of strength after the fourth track, "Selling Yourself Short," which is upbeat and uplifting with a piano riff coming in to replace the synthesizer drench of the previous three tracks. Another notable track is the acoustic "hopelist," but the surrounding songs are more filler material than anything outstanding.

Trying To Never Catch Up is interesting as a debut album because the band is obviously not locked into any genre and seem to still be having fun exploring their options. They claim a number of influences, including Radiohead, The Kinks, Grandaddy, and The Beatles, all of which are apparent and make for a good, well-rounded listen.