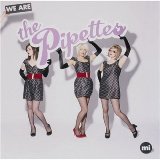 We Are the Pipettes

On one hand, the Pipettes* are the most refreshing thing to come around in years. On the other hand, they might just be the most sinister ploy to destroy every indie rock lad on the face of the earth. Think about it? Three British girls wearing matching dresses singing Phil Spector (pre-evil) inspired neo-soul songs about sex. Could there be anything as insidious as the Pipettes to capture the hearts and minds of the world's meek, indie boys? Putty in their hands. Has anyone tried playing We Are the Pipettes backwards? I'm sure it says something like "the invasion of Iraq is A.O.K!" or "Hail the Great Satan" or "the Fiery Furnaces are a good band". There is no other explanation other than that, unless the Pipettes want to fess up that they're totally innocent of such devious plots (author's note: if the Pipettes want to tell me in person, I will welcome any visit by the girls. Really. Anytime.)

We are the Pipettes gathers the band's previous singles (re-recorded) and adds some new gems into a long-player that is as infectious as smallpox (in a good way). The title track that opens the album lays out the general manifesto of the Pipettes:

We are the Pipettes/and we've got no regrets/if you haven't noticed yet/we're the prettiest girls you've ever met/we are the Pipettes/we will drop you in our nets/when you're crying in your beds/you'll hope we haven't finished with you yet.

After that, it is no prisoners. And yes, they did rhyme "nets" and "beds" (thank God for the British) and maybe lyrics aren't they're strong suit (e.g., give us the wheel/and make is a meal/do you know how I feel?) They've nailed the 'wall of sound' from the 1960's soul bands like the Supremes and by the times its finished, we're only 3 minutes into the album. And as if to make sure we're out for the count, they throw "Pull Shapes" at us. This is the musical equivalent of a being clocked in the head by a pitch from Roger Clemens (in a good way), in other words: you don't stand a chance. "Pull Shapes" is the most contagious song you'll hear this year. They're got strings, they've got full-on harmonies, they've got catchy hooks (clap your hands if you want some more.) The Pipettes have recorded the female, British version of "Hey Ya!" and no one will hear it. This song should be fast on its way to wedding reception rotation, but alas, I'd be surprised if it ever gets played on the "radio". Do yourself a favor, and if you listen to anything I've ever written here, listen to this song. Do it. Now.

There is a bit of a letdown after the Pipettes strike us with the one-two punch of "We are the Pipettes" and "Pull Shapes." They get old school on "Why Did You Stay", a 60's-style ballad about throwing some poor guy in the dumpster. "Dirty Mind" is a clever little number about, well, how filthy guys can be (he's got a dirty mind/you never know what you're going to find). It's got a playful piano line that balances some criss-crossing vocals from the girls. "Judy" starts with some low organs and finger-snaps under the vocals and grows into a tale about growing up with a slower tempo exhibiting some of the Pipettes range. The closest they get to the "Pull Shapes" magic might be "Your Kisses are Wasted on Me", a song all about how incredibly unattainable these Pipettes are as they sing and you might cry for some time/and you might try to hold my hand again. It might be the cheeriest "you're dumped" song this side of "Cry Me a River". It is refreshing to hear pure pop songs like "Because It's Not Love" with the doo-wop strummed guitars underneath the sweet harmonies of the Pipettes. It has no pretensions of being ironic or ashamed at its pop roots. Of course, unlike their soul predecessors, they sing a song called "Sex" which is about talking too much and not getting enough, well, er, sex. This song is followed by "One Night Stand" which is again, about sex and in particular, using guys for it: I don't love you/I don't need you/leave me alone/you're just a one night stand. Indeed. If you let the Pipettes loose in a college town, think of the havoc they could wreak? They'd be the indie equivalent of Darla, slaughtering the population or busy trying to make us all evil. However, when you finally begin to doubt their sweetness, they close out with "I Love You", where after all the barbs and pain, they've loved you the whole time. And yes, you accept them back with open arms. Damn you, Pipettes!

We Are the Pipettes is so much fun you don't even notice how they've manipulated your heart only to cast you on the wayside when they're done. They are modern day sirens. Music nerds will crash upon their rocky shores, gladly throwing their fragile bodies on the jagged rocks to glimpse the polka-dot dresses and choreographed dances. If the Pipettes are working for a larger, evil master, then we're well on your way to whatever apocalypse they will bring upon us. However, if they're just cute, charming and coming to a town near you, then hey, even better! It's fun without all the impending carnage.

* = Note to us unlearned American. It is not "Pipe-ettes". Rather, it is "Pip-ettes". Get it straight.