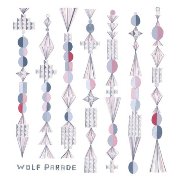 Apologies to the Queen Mary

Watching Wolf Parade open for their fellow Quebecois pop-geniuses The Arcade Fire recently, I was mightily compelled to lean over to my show-going companion for the evening and observe, "They sound like early U2 playing 'Born To Run' era Bruce Springsteen. That's not a bad thing at all, but, I mean, it's totally what it sounds like," which said companion laughed to pitch a fit and said, "Holy fuck, you are totally right."

This is what it is to be a record reviewer, by the way. Your brain is constantly coming up with these ridiculous referential formulas to describe what is essentially indescribable in words — "Sounds like Brian Eno and Mission of Burma exchanging gunfire in the burned out husk of a post-apocalyptic Zurich," "Sounds like the Talking Heads being violently sodomized by Diamanda Galas in a sunny field of daisies during a full solar eclipse." Etcetera, ad nauseum. And I just totally made those up off the top of my head. You end up feeling like Greil Marcus doing a Dennis Miller impersonation.

But I totally digress. Point being, it is a true comparison and it isn't a bad thing. Especially live, they have the same kind of sweeping, epic scale of Da Boss in his glory days, filtered through the shimmering, tightly coiled, propulsive quality of U2 when they were actually good, although that may also have to do with the fact that guitarist / singer Dan Boeckner has a vocal delivery that falls somewhere between Bono and, strangely enough, Beck when he's actually singing. Splitting lead vocal duties with Boeckner is keyboardist Spencer Krug, whose own vocal style often evokes that yelp-y thing that Isaac Brock and the guy from The Shins do, which makes sense inasmuch as that Brock produced this album. And while that particular singing style usually makes me want to scrape my frontal lobe with a fucking fork, in this case the overall songwriting is consistently engaging enough that it actually becomes texturally interesting rather than irritating.

From the stutter-start piano and just-under-the-surface menace of "You Are A Runner and I Am My Father's Son," to the intoxicating, propulsive, keyboard-driven rock of "We Built Another World" and "Fancy Claps," to the anthemic glory of the album's three stand out tracks, "Shine A Light," " I'll Believe In Anything," and "This Heart's On Fire," the variety brought to the band by the presence of two top-notch singer / songwriters adds immensely to the individual personality of each song and keeps the listener enthusiastically guessing throughout this stellar album.