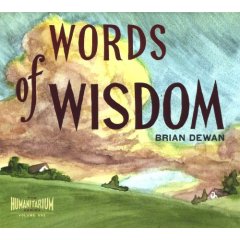 The name Brian Dewan will only mean something to the more obsessive fans of They Might Be Giants, as he helped to create the artwork for albums like Lincoln and has been a part of their circle of friends since the band's inception.

For those folks who overturn rocks and dig in crevices for musical buried treasure know Mr. Dewan from his work as both a solo artist and as a creator of odd electronic instruments meant more for the gallery than the stage.

These days, he is something of a modern day Alan Lomax, digging through boxes at estate sales and thrift stores looking for sheet music and songbooks, unearthing folk anthems of all shapes and sizes. Some have wormed their way into our popular consciousness, but the rest have been completely unheard of, at least by these ears. All of the songs here, though, are intriguing glimpses into early Americana in all its weird, wild and wonderful glory.

The songs (only two of which are attributed to a particular songwriter) venture from train-hopping reportage ("The Kettle Valley Line") to warnings of the dangers of pipe smoking ("Tobacco's But An Indian Weed") to a call and response epic love story meant for male and female voice, but both handled rather amusingly by Dewan ("The Mountaineer's Wedding").

Wisely, Dewan sticks to traditional instrumentation on this album, playing most songs on either autoharp or accordion, gussied up just so in spots with bits of percussion here and there. Married with his own untrained, somewhat strident voice, this is probably the closest that modern audiences are going to get to hearing the original practitioners of these songs.

For his efforts to bring these songs into the world once more, Dewan should be praised, but it is all more the more impressive that he was able to bring them to light through his charming performances on this album. And as it is subtitled "The Humanitarium Series Volume One", there is hope for more albums as good as this one in our future.