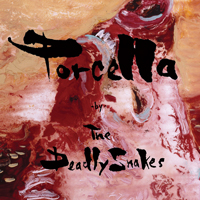 "Work" by The Deadly Snakes

Here's a great album I haven't listened to in a while. The Deadly Snakes' Porcella was able to catch my attention among the many stacks of CDs submitted for review to my top-secret day job. It was probably about a year and a half ago, at least, that I first heard the record, and for a while it remained in very heavy rotation on my iPod and iTunes. The band is from Toronto, and the song "Work" is a deliciously satisfying explosion of instruments with male vocals on top. I don't have the liner notes for the album, but I'm pretty sure I'm hearing drums, guitars, saxophone, organ, chimes or bells or maybe kitchen utensils on pots and pans, tambourines, maybe some handclaps. This song is a little Morphine-y, though with more instrumental diversions. From the band's website:

This is an album that owes its sound to the Zombies (Odessey & Oracle-era), The Kinks (Village Green-era), Love, Captain
Beefheart, sixties gospel, Nico (Chelsea Girls-era), Leonard Cohen and Nick Cave and the Bad Seeds far more than to garage rock.

The whole album is stylistically original and diverse, and this particular song made it on to more than a few mix CDs I made around the time I discovered it. "Work" is not on the band's MySpace but some others are, including the also great "Gore Veil." Wow, I forgot what a fantastic CD this is, and now I'ma listen to it for the rest of the day. Go iPod Roulette!