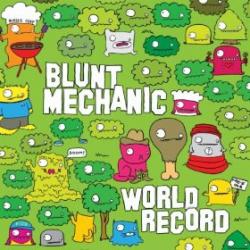 Blunt Mechanic is a great name for a band shedding the viscosity of main dude Ben Barnett’s basement bawl over gobs of releases as Kind of Like Spitting. Over a dozen releases of various sizes and shape of things to folk-punk, a Portland “birds of a feather” to the emotional murk of guys who like American Music Club, Barnett has stopped sobbing and gobbing on his four track.

Barnett has come to Seattle to join the academy (becoming Music Director of the Paul Green School of Rock), and that has admittedly tightened a few nuts and bolts on his musical dune-buggy. On the Barsuk debut release World Record, Barnett’s mostly one-man and new band Blunt Mechanic is the poetry of finding a fuzzbox or amp to play through and getting chicken-skinned that anything comes through the crackle, TV dinners eaten on the kitchen counter, “dark side of the Marquee Moon,” and the kind of music nerd who would make that pun. Barnett writes, plays, prays, and stays together as he chomps along on lots of guitar jam on a thin bread of bass, and drumming sloppy in charm like Ringo’s. It all started to make my toes curl on third track and first single “Aluminum & Light” (right click here).

(Dude watches his life pass by in a shitty punk club, but you know, that’s alright, because there was love, there was light.) And moist two chord blasts beneath it all.

Throughout World Record Barnett attempts to adapt to a changing, abandoned world, able to throw up that sweet wall of noise at the end of “Aluminum & Light” to dazzle us with, but incapable of treating the person in “Proof” any better than he has been treated. Though voice is still pure Built To Spill fanboy crank and crease (one part Doug Martsch, one part Phil Ochs, and two parts the guy from Dead Milkmen, wtf), these songs aren’t the mashed, melodramatic odes to moribund lifestyles KoLS excelled at. There is a harsh laughing cough to the baked buzz about something like a broken heart, and “so much hate, so much weed / and pimps and bitches in every scene” in “Why Can’t This Be Canada?” (the most curmudgeonly hipster-aging-badly-track you’ll ever giggle to). But musically, Blunt Mechanic is fully capable of delivering comin’ down-soul riffs on tracks like “Proof,” and the sad sack of “Is or Isn’t All The Same” (“God I wish that I’d never heard Smog”), though the caustic complaints pile up, the engine is really warm here. You can take this baby all over town, and never notice how grumpy they guy who built it is. Possibly Ben Barnett’s best album, and at least one of my very favorites.