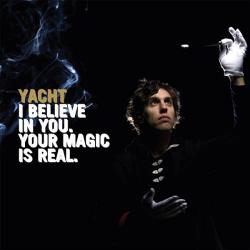 I Believe In You. Your Magic is Real.

Such a little band is the Blow, yet such an output of great things. Jona Bechtolt was the other half of the Blow with Khaela Maricich when they released one of my favorite albums of 2006, Paper Television. Now, he returns to his band Yacht and takes it to an entirely new level, approaching and at times transcending the synth-pop genius of the Blow. I Believe in You. Your Magic is Real is an unsung hero of 2007, coming in well under the radar for most music listeners, but it really shouldn’t be, as it combines the electronic experiments of the earlier Yacht discs with a real pop sensibility. What results is an album that is so refreshing you get surprised every time you pop it in.

You would never guess this is the turn that Yacht would make after hearing the cacophonous noise of ”Mega," yet somehow Jona’s time with Khaela must have awakened some hidden songsmith that was deep inside. “So Post All ‘Em,” with its collage mentality, still hints that this Yacht album is something entirely different, with most of the instruments working with instead of against each other. Where it really comes up is “See a Penny (Pick It Up),” which is a downright remarkable pop song; oddly enough it seems like the sound that U2 was searching for on their Zooropa and POP albums but missed by wide margins – a sort of hybrid dance-rock and pop-rock that exists in the nether region between Kraftwerk and Britney Spears (which is suppose is a region that is big enough to hide most of the solar system). Nowhere in the previous Yacht oeuvre does such a song exist yet it sounds so distinctly Yacht-like. Of course, “We’re Always Waiting” is even more Yacht-like, with a jumpy, quirky beat and melody and Jona’s cheerleader-like chorus of ”we want all that stuff/all that stuff that costs too much”. Nothing like a commentary on the materialistic society we live in – all set to dance music!

The most Blow-like outing might be “It’s Coming to Get You,” although it might be a little too light-hearted to really have found a home on a Blow album. Think of it like Islands with a little too much caffeine in their system. If you’re more in the mood for 80’s dance/disco, just shuffle over to “Platinum,” a sort of LCD Soundsystem tribute right down to the repetitive, building sequencer that runs across the song that fuses with the Kraftwerk inspired synthesizers. “It’s All the Same Price” heads in an entirely different direction, instead taking its cue from house music as the song builds from its clunky opening beats into a late-night rave. If that’s not enough variety, “I Believe In You” is Folk Implosion-like in its synth-rock meets post-punk mentality – and there is something undeniably charming about hearing Jona sing ”why is there a picture of a penis on your fridge door/it makes me feel awkward." “I Believe In You” is one of the most refreshing songs on the album and would be a brilliant song for a summer-driving VW commercial (of course, Jona would probably be horrified by such capitalist ideas).

Jona still indulges his noise fetish on tracks like “Drawing in the Dark,” but here they are merely interludes rather than the meat and potatoes of the album. Instead, when he just goes instrumental, you get tracks like “If Music Could Cure What Ails You,” which for all its pretension, still manages to keep itself focuses into a melody. “Your Magic is Real” is the odd little freestyle number where Jona lists, well, lots of people and labels. Not sure if I recognize any of people (except maybe Devendra Banhart), but it's a fun little sojourn into the people and organization that Jona is grateful, which I suppose is more of a personal touch than just getting listed in a tiny font on the liner notes.

Much like Patrick Wolf’s The Magic Position, Yacht’s new album came out of the blue. If you’ve missed it so far, now is your chance to make up for it. I Believe in You. Your Magic is Real is the perfect summer album, uplifting and engaging, but not too serious for its own good. Hopefully what we’re seeing here is a splitting of a cell into two new viable forms, one half going to the Blow, the other to Yacht, and both pioneering the resurgence of interesting and excellent synth pop in the world of moodiness and guitars.