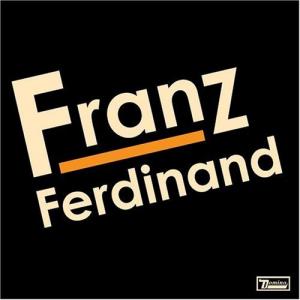 My iPod recently broke the 13,000 mark for songs (well, this evening in fact – and for you trivia buffs, it was Wu-Tang Clan's Enter the Wu (36 Chambers) that cracked the 13K mark) and when I actually sit down to think what 13,000 songs actually represents, it kind of hurts of my head. It works out to be something like 40 days worth of songs, all packed into the little shiny box. This makes it all the more interesting to hit the "Shuffle Songs" button and see what comes up.

Today, we get "Auf Achse" from the self-titled Franz Ferdinand album, which is still one of my favorite albums of the decade, and even when listening to this song, admittedly not one of my favorites on the album, I wish that I could listen to Franz Ferdinand with fresh ears. Not that I'm trying to hear something wrong with it, but just for that visceral excitement of hearing it for the first time. I'm sure I'm not the only one who likes to play that mental game, sitting back with your eyes closed and just concentrate to try to really listen to the song again, not just hear it as audio fodder. I mean, really, that is what being an audiophile is all about, the joy of the musical experience, whether it be Mendelssohn, Wu-Tang Clan or Franz Ferdinand. I try to drift back to when I first heard the song or the album, the setting, the timing, my mental state, the whole nine yards – it might be a vain attempt to recapture that singular moment in time that existed for a fleeting moment when your synapses started firing thanks to the stimuli of Alex Kapranos vocals, Bob Hardy's basslines, Paul Thomson's drums. It was all unfamiliar territory to be charted, discussed, distributed, savored – all for the first time. That moment is usually lost to the mists of time, but taking that effort to relive those moments can be some of the most satisfying time you can spend with your music player of choice and a set of headphones. You're not just capturing the music, you're capturing your life, and even though your life and that music might not feel the same now as it was 3 years ago, you can always use that music as a bookmark for a point in your life. You might not be able to go home again, but at least you can visit for a while.